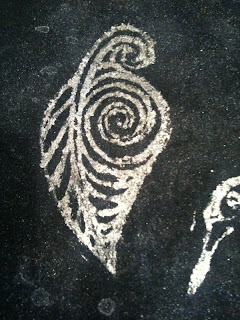 It's ANZAC day today and very quiet - I presume everyone got up for the dawn service and then went to sleep or headed off to Margaret River. Anyway we pretty well have the place to ourselves apart from the 3 ladies who came in from Toodyay to buy goodies and were overawed by our Aladdin's Cave (even if a lot of it has gone to Melbourne) and also by my hair which has just been refucshied. Kaz - Ian said he saw the camera on us at one stage when there was a lineout very close to us. Intersting to go to matches live - you don't see a lot of the action but you get a better perspective. I don't think the man who sits next to actually watches the game - he listens to the commentary and watches the screen all the time. I watched Dan and Zac and they were both pretty laid back out there.

I still have a list of stuff to do but the world won't fall down if I don't and I know we have loads of stock as always (fat more than the space) but I decided that as I sent all the workshop out for the two workshops starting in May I would do some play with the flakes - I sprayed some black cotton fabric with Starburst Sprays (Black Orchid Silver which I love for the work I am doing at present) and was pleased with the effect on the black and then I used one of my NZ stamps and glue to put silver gilding leaves on. It will go in my every growing Okarito journal. This is part of one of the lessons for Gilding The Lily - you can never have enough glitz....


And then I thought I would try out the new Magical Micas and make some colour charts to take to Melbourne and for the web when we get back. These come in sets and match the Starburst Spray colours - you can't see the two way sheen so well here but trust me. They have a binder in them and I used my waterbrush and only a tiny amount of mica powder - they are quite wonderful. I shoudl have been tidying the studio but all I did was move things aside. 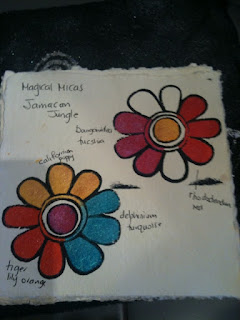 Because I forgot to get any meat I think we might go to GoGo's tonight becasue I was going to cook a curry.
Posted by Downunderdale at 3:40 PM

Glad you are finding time to relax. The silver leaf piece is gorgeous and the Magical Micas look interesting.

It must be nice for you to have a lazy day after all your frantic activity. I love the silver leaf with it's spiral and those mica sprays look very tempting. That's a neat way of getting to eat out!!