We have had a nice relaxing weekend in that I have collected up all the orders which have come in since Friday afternoon and Ian has finished getting the specials up - nothing like being late once again..... We went to Elizabeth - The Golden Age on Sat afternoon - the story is limited - really about the Spanish Armada but we loved the photography and the costumes and Cate Blanchett so of course it was worth it! 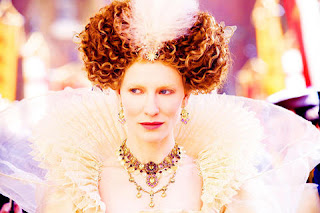 Then we snuck off to Luigi and Martien's so Ian could have spaghetti bolonaise (that's his favourite Italian dish) - Bruce and Kazuko have gone to Walpole for a few days so hope they are not getting too wet. The weather is cooler which makes me happy but looks like it will hot up again for the weekend coming. Grant arrives tomorrow so hopefully the squatters have gone - lots of cleaning up of syringes and stuff though. Grant and his builder start work on Tuesday.

I have spent most of my time sorting out my HH stuff - nothing serious to show but I have been making little sketches and thinking about what I might do for decent samples. When I was out walking this afternoon I saw some fabulous interestign dummies in a shop window which gave me a very good idea - had to make my notes on the back of my tiny shopping list. I have litle stitched samples undergoing a variety of distressing activites - not rusting yet.

We went out for a dim sum lunch with Eva and Malachy - very nice outing. Our street is still quiet but it looks like the works have finished so the traffic will be back once they open it up again - shame.

I have just realised that it is one year since I started the neocounter and I have had just over 88,000 visitors to my blog - amazing!
Posted by Downunderdale at 10:12 PM