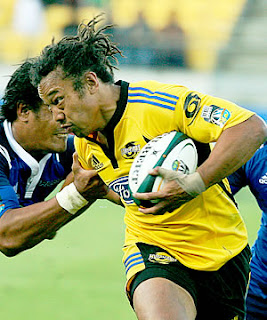 Okay - so the Hurricanes won their Super 14 game yesterday - the only NZ team to win and it was Tana's 300th super rugby game. Nail biting until the bitter end. The game which followed though - Brumbies and Reds - was so boring that I started falling asleep. The best parts were the punch ups and the laughs at the referee - how could anyone take the man seriously?
Next Friday we will have to rush to our hotel in Melbourne to watch the Hurricanes play the Brumbies.

Spending today working on 5 thousand tasks necessary for the next two weeks. The last of the stuff for the workshop, stitching sleeves onto my two pieces, working on the workshops for the Art Retreat the following week and Ian is working away on the book. Tomorrow I will leisurely pack the suitcases. So - nothing exciting in the way of work but I am making little Medieval Magic panels.

Last Thursday night we went to Eminem - the Turkish restaurant. The food was wonderful as always.

Little update - just found out that NZ has won the second one day test against Aust. That is amazing stuff. Just a shame Grant isn't doing so well in the 18ft skiffs In Sydney. His turn will come in the next race on Tuesday.
Posted by Downunderdale at 2:45 PM

I went to the Hurricanes match and it was soooo exciting the defence in the last 5 minutes was nail biting. Pity about the Reds. Back to textiles today.

I'm not mentioning Rugby!
The cricket game was SO SO exciting to watch ( on TV ), I haven't been so pleased to see any team win in a long time.A well deserved win and quite frankly a huge relief for them and everyone over here.