I have just found out that Pokey Botlon's book is due out in April - I had almost forgotten I sent her some ATCs last year - looking at the list of contributors I have seen plenty of interesting names so will wait until we get it probably not long after April. 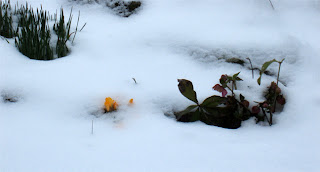 Dorothy has sent me a pic of her garden - wouldn't I just love to be in UK for that snow. By the time we get there in October it will be an Indian Summer again. Snow means you can cuddle up in bed with lots of coverings.

Roger Water's concert - well we have never been here when there has been a concert and of course the stage was facing the other way so we got great distortions! Second half we all went down and sat on the grass outside the park at the other end and listened to The Dark Side of the Moon and The Wall whilst also watching the fireworks for the opening of the Perth Festival. Not sure I woud have paid for the concert though - the once you have done those two pieces, the rest is all much the same.
Posted by Downunderdale at 9:25 AM