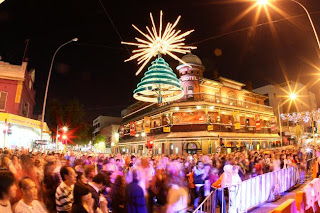 New Year's Eve in Northbridge - not that we were there but we did go one year - the crowd walking to and fro past our house were jovial enough and apparently it was basically a good family event. Good to hear.


I am glad you all liked the waterlilies - aren't they lovely? They are both happy in their new pots in the garden - tomorrow when I get a moment I am going to sit and draw and see if I can't do something before the flowers disappear. The cat from next door now has 3 large containers to drink water out of - spoilt for choice. 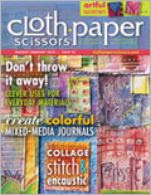 Well we did stay up until midnight and even beyond so had a sleep in this morning and then actually roamed up the street very late for breakfast which maybe could have been lunch. Late yesterday just as we were about to close up operations, Cloth Paper Scissors arrived - it wasn't due until Monday so we packaged all the businesses and got them away - we could post anything in red or Express post bags as the post office was closed but Ian could feed them all into the boxes so at least we know they will arrive fast. All the rest we will send out as soon as the post office reopens - Monday or Tuesday - I am not sure. It's a good issue this round - including an article by Beryl Taylor - always worth reading.

on our wandering back from breakfast - Russells Antique Store which is full of all sorts of things we used to have in our house when I was a kid and stuff which I got rid of. One man's rubbish is another man's......

One of the best known landmarks along Beaufort Street, Highgate is the Russells Antique Store. Dominating the corner of Beaufort and Broome Street since 1906, the Federation Italianate Style building has been synonomous with retail in the area for over a century. The original owners were B&J Ferstal who operated their fruit and vegetable shop in a section of the building. It was constructed as a two-storey retail premise with two shops, and living quarters on the upper floor. The two storey building features stuccoed facades, arched pediments, and a cast iron covered cantilevered filigree bow verandah with turned posts. If you look closely above the entrance door the words "R.M.E.H. Corner" are inscribed on the curved pediment . It is currently occupied by the Russell's Antique Store. The owner is well knowledged on everything antique and is quite happy to have a chin wag. He also has a great stock of unusual and often bizarre items. To the left of the building is Veritas - they are on holiday. Very few places were open this morning - those that are, make a killing.

We are having a lazy day but the newsletter is almost ready to send out and then I shall go read my book and admire my waterlilies once more.
Posted by Downunderdale at 2:45 PM

Glad to see you are up and about after your late night.
Why worry about putting the stuff in the post--those lazy bums won't be working will they.

The fireworks over Sidney Harbour made the front page of the Daily Telegraph this morning - fantastic. We were dog sitting our daughter's dog who is terrified by fireworks and were quite pleased that this year's local ones seemed to be quieter than before. CPS sounds interesting - just when I gave up my subscription! I'll have to track down a copy somewhere. I do like Beryl Taylor's work. Happy New Year.

Thanks for the heads up Dale hopefully my issue of cps will arrive before i depart on my cruise. On another note I really like the shop 'Behind the Monkey' which is across the road from the antique shop.