I have been rather tardy this week - sometimes when you have something you have to do but don't really want to it slows you down on everything else. Well I have sort of finished it now so shall be back on the creative track very soon.

There are 28 comments left for the radiant rain giveaway which means 3 sets - I will draw the names tomorrow and let you know - if I get over 30 comments I will do a fourth. And I will keep the sets for another something before too long. The big red bag is an Aussie thing. Each set weighs over 500grams which would make it very expensive to send overseas....... 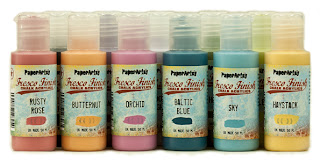 We have added quite a few new goodies to the website - new Paperarsty mini stamps - I had to do a new order and just couldn't resist a few more. Plus in the order came their fabulous Fresco Finish Chalk Acrylic Paints - I like these - they are matte and chalk -like - quite different from the usual paints I use - good for stamping into as well. And I have found a few books which I was sure were on the web but they had vanished. 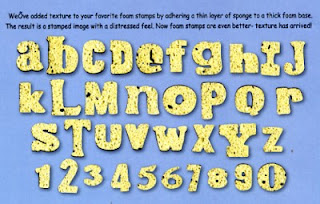 Also I found a supplier with the distress sponge alphabet - they are selling very fast - really good to get that distressed look.

Our car - useless thing that it is - decided not to start last night so we got a taxi to the ACO - another fabulous concert as always. We got the gold star award for actually being there before the others in our row - they couldn't believe it - we always have to climb over to get in at the last minute. Then we thought we might get a taxi home but the few which drove past us were not interested so we walked. Nice night - winter seems to be over. This morning I got a taxi to the hairdressers but coming back was not so easy and I walked half of the distance - two surly taxi drivers, both who tried to pretend they had no change. I won in the end with both of them. The car had a broken fuel pump or something and sadly has been fixed - my hope is that maybe it needed to go to the car cemetary but I have lost out again.

People have asked about the roses - no special occasion - I just like to have them often, They are cheap - usually between $6 and $12 - these were $12. Still lasting. There is a sign behind the counter in the dairy which I have not seen before - it reads "Fresh flowers will last 5 - 7 days. You can help them last by adding water to your container into which you put them." I had to laugh and asked the lady behind the counter if they had had problems. She told me people bring them back complaining they have died - if you want flowers to last then buy plastic ones - ha ha.

Surly taxi drivers.......hmmmm.......do you have good taxi drivers in Perth generally or were you just unlucky ?
I don't use taxis very often, but in Melbourne once, I had to give the driver directions to where I wanted to go....he was heading in the completely opposite direction !!
Love the sign in the dairy....flowers in a dairy ? I think of a dairy as a place that sells milk !!

I like the look of the distress sponge alphabet. Hope your car will make a good recovery and I love the notice in the dairy. Hope your roses last well for you.

Wow Dale you walked home from the concert--well done and I am glad the car has a new lease of life I think Ian would miss it if you got a new one.

Wonderful sign in the dairy. Thought of you forgetting once to go to an ACO condert when I realised about 9pm last night that we should have been at an ACO2 concert here - I muddled up the week!!! How stupid is that. We hardly ever use taxis but I gather they can be just as surly here in Mackay as well - and some say the most expensive in Australia. Cheers

How lucky are you getting roses at that price, they're about 25 dollars hare for 5 or 6 heads, we grow them but they have to be in wire cages as the possums love them more than I do. lots of lovely new goodies. Shame about your car, I'm hoping ours will die too.

The dairy sign would make most of us smile. Buying flowers mean you can save that cellophane to use in your creations, funnily enough we had this conversation at a workshop I did today.