what a bit of rain can do 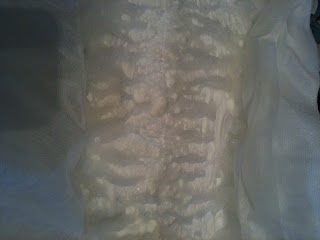 Look what a bit of rain can do. When it poured the other night, we had our usual as yet insolved rain int he kitchen but in the sunroom where I have loads of Ikea trolleys full of stock, the rain came in from underneath where it didn't run off fast enough - but somehow it managed to get to the top of one of my trolleys - the one with the roll of Vilene Solusheet of course. This is one side of the roll - looks rather like Franz Josef Glacier really. But I do have a large pile of cut solusheet from the rest of the roll which I am going to bag up and sell for $20 - that's good value and I can't be bothered counting how many smallish sheets there are - imagine about 50 metres on a roll and how much when you cut down one side. So if anyone is interested email me. You can overlap it and even iron it together under baking parchment. 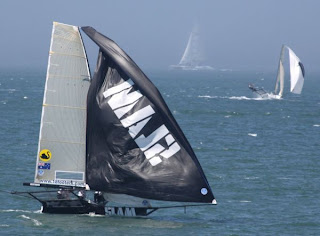 Grant started slowly in San Fransisco but yesterday had a win so he will be happy - I think he is up to 4th place now. He has changed the name of his skiff since SLAM were not that much forthcoming with sponsorship - if you look at the mainsail you will see a Black Swan - for WA and Mounts Bay Sailing Club. 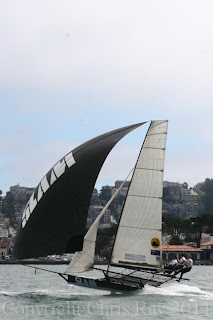 and becasue I am his mother I found a second picture - I think this was from the local paper front page in San Fran. Apparently it was very foggy and windy. 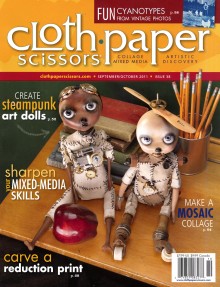 Back here we have had a very busy day - CPS 38 arrived and has been sent out - there are a few copies left over. It has an interesting article on paper making which I have found quite useful.

Posted by Downunderdale at 6:26 PM

Oh dear! what a shame to have such a disaster. Does look a bit like a glacier, maybe seeing the snow will help to bring some cheer to you and Ian. Bet you shift the trolley,too in case it happens again.

It's a good job you are resourceful and can change a disaster into a 'not quite' disaster. I hope no other stock was affected and that the clean up didn't take too long. We have had a deluge here today which will save me watering this evening but it's already easing off. Well done to Slam.

Oh dear what a disaster Dale. Get the roofer in quick. I suppose you are still hoping for more rain though. You could start a new trend with that Solusheet- the wrinkly stuff, I mean. It would be fun trying. Can I please buy a $20 pack and I am happy to have some small sheets in the pack. And even some of the crinkly stuff too to try. And if you still have a spare copy of the CPS then can I have one of those too please.
thanks
Glenys Coombridge

Sometimes rain is not so welcome. Great pics of Slam, they do lift high in the water; looking forward toCPS 38.