sunday morning and now I must clean up again 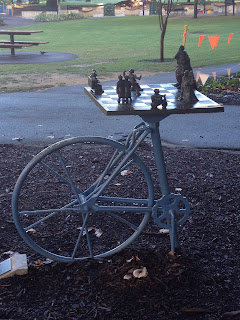 My pic for Sunday - seen at Hyde Park. 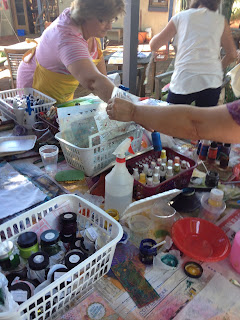 I had a lovely in the studio workshop yesterday - 7 happy ladies - well they were busy creating and playing and said they had a lovely day - lots of surfaces covered. Very easily be two or more days because you have to rush. 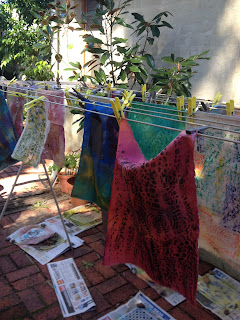 Lots  of sun dyeing and even before the sun appeared there were great results. Fabric all over the garden very colourful. And a clothesline always looks great with fabric pegged everywhere.
Ian did his great stuff and his coffee was given the big thumbs up. Lucky me every day. 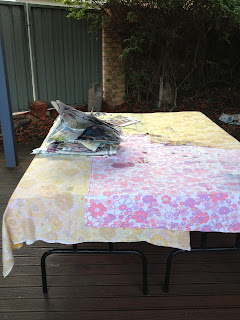 I went inside to watch the rugby instead after everyone had gone - Highlanders had their first win - yeah - and the Force drew - it was a good game. In fact all four games we have watched this weekend have been exciting. Didn't watch it over night but shame for the Hurricanes and especially for Captain Conrad - hope he is okay.  Here are the outdoor tables the morning after. If I had another or a third day - think of all the wonderful things we could have done with the newspaper. Some of it ended up very colourful. 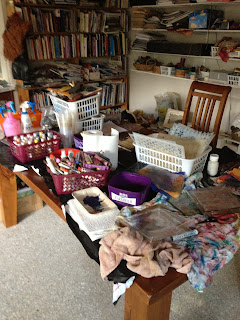 And inside the studio my big table is full of stuff - I should say mixed media excitements or even mixed media mayhem - waiting for me to sort and put away and all of that sort of thing.
Thanks everyone for coming. 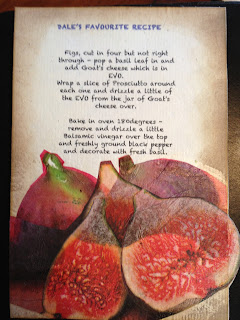 And look what Cindy made me based on my current favourite recipe. Thank you so much - I shall treasure it. And especially wait until the figs reappear once again. To think we had about 5 trees when we lived in Mt Lawley and we didn't even like figs them. Not to mention the two which were chopped down for the studio. No comparison though.

Posted by Downunderdale at 9:35 AM

Love today's photo - so quirky. Looks like you all had a great time over the weekend.
The figs look beautiful but I think the fresh ones need to be eaten in the country they are grown in. They never look like that bought in the UK!