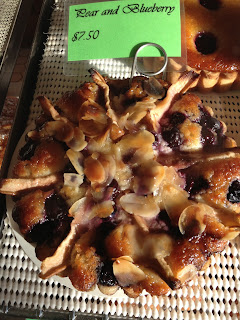 On my walk today I called into Nick's - The Pearl of Highgate - and took a photo - looks very nice doesn't it but I didn't buy it - Ian popped in for a ciabatta a little later on and heard I had been. 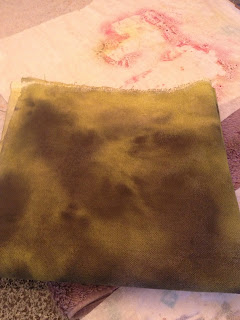 Not a great photo I know but this is Openweave - in Ironbark colours. I have several metres here and am thinking of adding it to our fabric selection. 50cm x 50cm - what do you think? If I have time today I shall add some metallic colour etc and maybe stitch. I am preparing for my studio workshop tomorrow - On The Surface. Looking forward to it. Sun dyeing first and after a lovely day of rain it seems to have cleared up and the sun is out so here's hoping it stays that way.  I have added a second workshop for 18th March if there are enough takers. Just email me.

If you have followed my story from a long way back, you might remember the Ally Pally where UPS - aka Useless Parcel Service - caused total chaos in holding our boxes of goodies in the Midlands airport and only delivering it half hour before the show opened thanks to the vigilance of Anna at Twisted Thread. We were what you might call highly stressed and have never and will never touch UPS again. I have a shipment coming from UK with - you guessed it - UPS - it has been delivered to Philadelphia instead - apparently something to do with US customs - finding this strange to get my brain around actually but anything is capable of happening when you deal with UPS.
Posted by Downunderdale at 10:55 AM

That tart looks gorgeous - I admire your restraint!
The ironbark colouring looks good too - very natural and a bit moody.
UPS are not doing themselves any favours, are they? How can they keep getting it so wrong and stay in business?