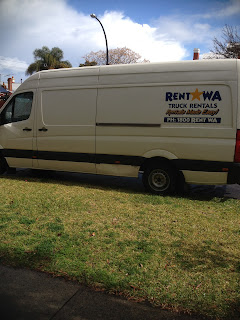 I haven't been anywhere just busy with the show here in Perth. We have been doing shows for 17 years amazing as that sounds and at one stage 13 shows in a year. The very first outing was at Fibre Forum in Alice Springs - I was doing a workshop with Celia Player and Ian was manning the shop - I think he was a wee bit dubious about this thread stuff but while he was there three ladies came in and one said - "Wow - this is better than sex" so when I returned he informed me we might be onto a good thing. The lovely thing about textile art stuff is that it feeds your soul. Believe me when I tell you and I know plenty of people who get so much pleasure just from looking at their goodies. Ideas can flow from what you see and bring you lots of joy. Won't make you fat or give you a hangover - might make you poor but it is only money..... 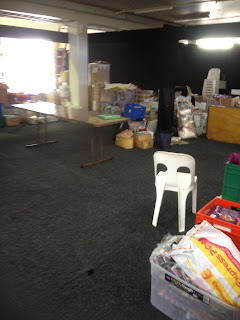 On Wed late we carted everything to the showgrounds and dropped it off - first time we have actually done that and it really did make life easier on Thursday when we went to set up. 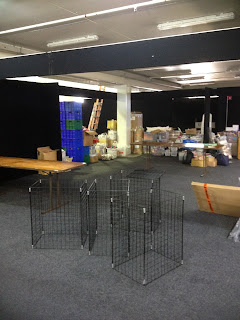 Our new big dump bins especially wonderful for all the fibres.
The first commercial show we did was at Rosehill - Stitches and Craft and I shared a stand with Sue from Sanshi - had no idea what to expect but very excited with the response. It seemed that if I needed stuff then so did many many others. So we have done lots of shows and forums and I have demonstrated stuff forever. I was definitely the first person to introduce loads of this stuff to the good people of Australia and New Zealand (remember Embroidery 2000?) 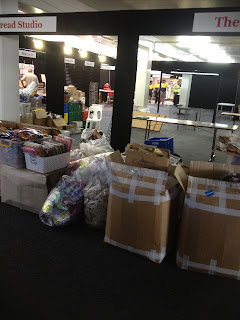 More stuff coming in - of course Murphy was in action and it rained but we were spurred on by the thought of going out for dinner. 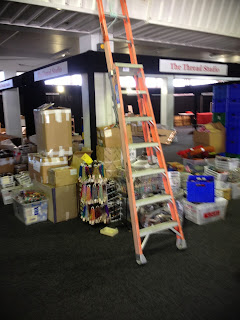 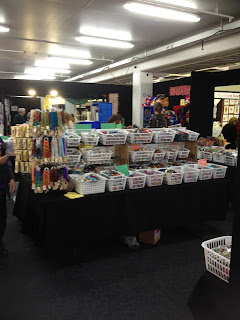 On Thursday we set everything up and got out by 7.30pm. 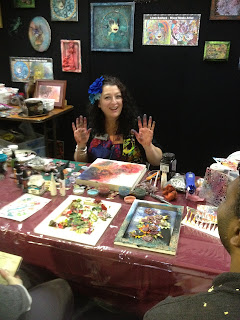 We were very lucky indeed to have Linda and Jacinta on our stand - they are both such creative people - Linda does much more than just get messy hands - she is a fab artist. 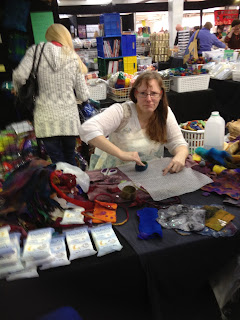 And Jacinta was wowing them with her felting including an i-phone holder for me. 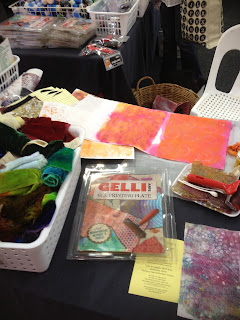 I played with various things over the three days from silk paper making to embellisher stuff to sewing on Romeo and with the flower stitcher as well as the Gelli Plates - here is part of my messy table. Of course I sprayed everything as well and also played with the metallic flakes. 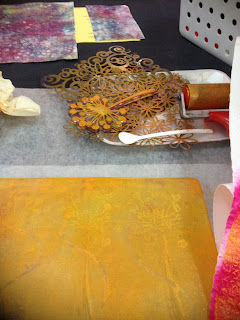 I used stencils and stamps and plastic spoons - you can do almost anything. If you look carefully you will see one of our two new stamps - they should be here tomorrow. I love them. 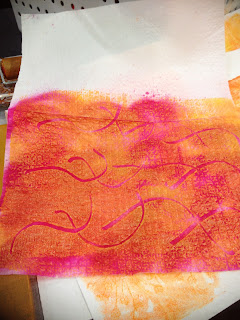 I have to show you this - naturally I forgot to take fabric - well I had Evolon and Qantas Club towels  - this is a paper towel and once I had monoprinted I sprayed it with a Flat Fabio - Rose Hibiscus - love that colour. 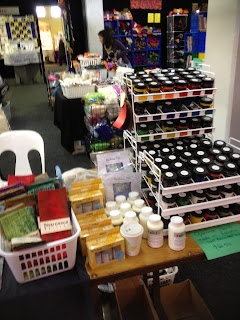 Part of my table - I also played around with the deColourant and Opulent paints - busy little me. 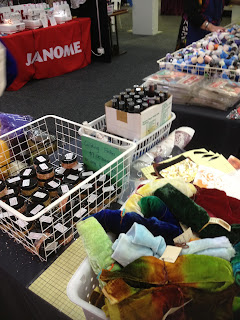 and embossed velvet. The metallic flake tray was pretty well empty by the end of the show. 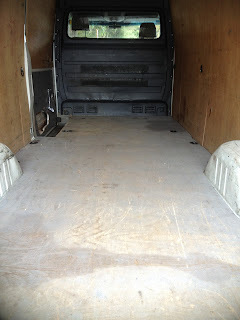 Marion and Oliver helped us pack up and we were home in 2 hours - amazing. On Monday we had a wee sleep in and emptied the van (this was about the moment Ian became happy)  and returned it. Now I am sorting, counting, stacking, ordering and all those other boring things. We are nearly up to date with the orders except that the latest Quilting Arts and Studios have arrived so they will all go tomorrow. We also have lovely new stencils for the web - some have arrived and some about to arrive. it never stops.

We have really enjoyed the rowing - fabulous three gold medals to NZ - we recorded it all and watched it when we got home with matchsticks to hold our eyes open and fast forwarding through. Then on Sat we watched the Chiefs win the Super Rugby - knew they would and hope you had plenty of faith Ali!

So we had a wonderful three days or the show and eventually will allow ourselves a day off!
Posted by Downunderdale at 6:48 PM

It must have been a wonderful show Dale - you and Ian work so hard and your stand always looks fantastic, even if I've only seen it in photos.
You are right about the goodies being inspirational. When I have bought stuff I love peeking in the bag and then getting everything out for a stroke! It does get used eventually.
I've overdosed on the Olympics and feel almost as exhausted as some of the athletes. It must be one of the best Games and the warmth between competitors is lovely even if they are real rivals while they are doing their stuff.
Chill out time soon for you - enjoy.

Now you have rally whetted my appetite for K&S!

What a mass of stuff you take to shows, sounds like you had a great, if busy time.

Great post, showing so many wonderful goodies. I remember the first time I saw you at a show was back in 1996 in Brisbane - doesn't time fly! You have expanded so much since then. Hope you get a bit more tie off soon - and do barrack for the Aussies as well as NZ! Cheers

kia Ora Thanks for sharing Dale. And I'm with you "Go the Blacks" and I was thrilled the Chiefs won their great game...