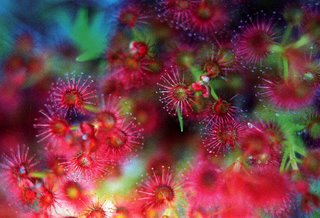 no pics to show because the camera battery is flat so tomorrow - the interesting word! Instead here is a photo taken in King's Park earlier this year which I really like.

This weekend has been quite rewarding - just the thrill of actually moving stuff into the studio. You have to realise that each item moved requires sorting cleaning and carting. I have moved in my three big jarrah tables and three machines and sorted all my threads and accessories. Not in final places yet but it gives me a chance to see how things look. Ian has been busy installing the bench for the wet area and we visited a shopping centre (much to his horror) to buy baskets and look at shelving. We have decided on a really good system for above the bench and probably the same for the large wall. I want everything open and accessible and in not too large plastic containers. If they are too big then that's how I get in a mess. The room indoors doesn't look like much has left it but after a week or two I should be all installed and it will be the tidiest and most organised I have ever been. Obviously if the 'painter' comes tomorrow then I will be in absentia!

Actually Val and Jim called and we went out for a dim sum lunch - very nice followed by a glass or two of wine in our back garden. Glorious day in Perth today - spring must be coming again. It's been just satisfying knowing that I can start using the studio which is taking on a character of its own already. I see France won their soccer game so as my chosen team all is well...... I still know nothing about soccer.
Posted by Downunderdale at 4:54 PM

You must be so excited to get into your studio finally, Dale!

I love the photo of those flowers -what is it? And the pieces you have made from the napkins - gorgeous.

Congrats on the move! I love Kings Park, when you are next there can you snap me a pic of the staircase please?

congrats on the piece in CPS - fantastic!

Dale that phtos is SO beautiful - I can just see it in stitches and beads.
Helen