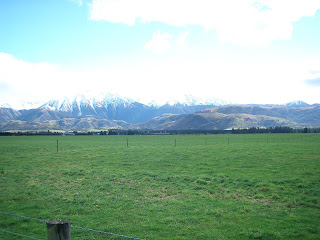 This is the view we saw when driving from Christchurch to the coast - the snow capped mountains waiting for us but not as much snow as I thought there would be which is good really as Ian wasn't excited at any prospect of driving through snow. The car rental people told us that if you hire and plan to drive to Queenstown you must have chains. Nice sunny day driving on the east coast side of the mountains - the Southern Alps in case you wonder and haven't ever been to beautiful NZ. 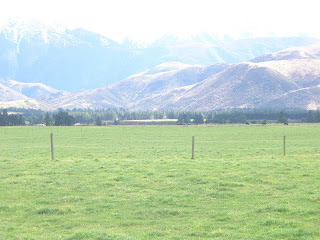 All that rich farming land. Next day Ian met a guy on the beach in Okarito who had arrived same time as us in a helicopter - his farmer mate from Ashburton's helicopter- twenty minute flight across the alps. As I say - rich farming country. 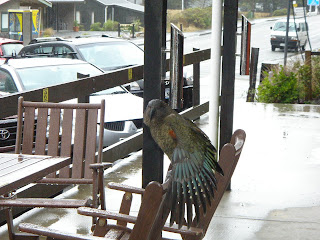 At Arthur's Pass, we stopped for coffee and this friendly Kea was sitting outside - I expect they do well - they are very cheeky. 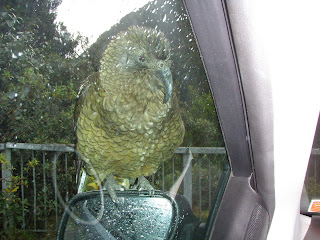 A little further down the road we stopped to look back at the Otira viaduct which is pretty spectacular and I posted pictures lasy November when we went over it. I was going to get out to take a photo but these cheeky Keas were busy hopping over the car and this one settled himself on the mirror- obviously very used to tourists and travellers. 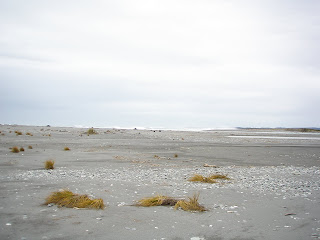 The view on the each in the morning when I went for my walk. Now Ian has a new camera I have been allocated the old one - the beach was deserted except for us 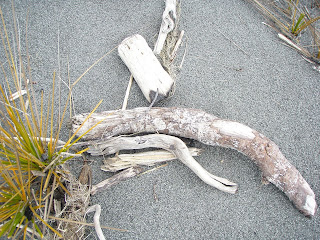 Lots of driftwood everywhere - a real West Coast beach. We don't need to collect any for our fire - the wood shed is full with both chopped wood and kindling. Don't even need to chop it. 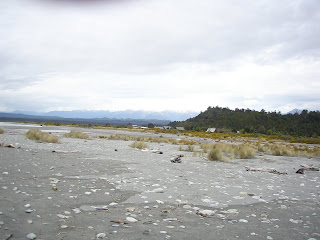 Looking back towards the snow capped mountains which you can barely see- the light was very bright-my glasses which are those changing ones were as black as could be and very fast. 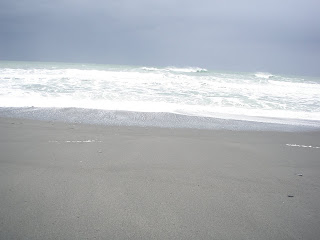 Looking to the sea - not as visible as it really was - there were some very big waves crashing in - varying shades of grey all around me. 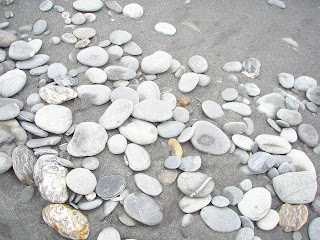 And all the wonderful stones everywhere but no - I really can't take them all home with me. Magical.

Lots of rain later when we went off to Whataroa so we didn't go for a bush walk. However it is the coast and it will rain - right now on Sat morning the sun is out again so time to be off and explore.
Posted by Downunderdale at 7:50 AM

careful of the hire car and Kea's, they were ripping bits of a helicopter one year when we were skiing at Mt Hutt and the fellows had to keep the blades turning, even then they thought this was another game and rode them around and around. They also ripped off the windscreen wipers of cars and the rubber around some ones wind screen. Love them but they are terribly destructive.
Love that beach couldnt believe the amount of driftwood on the one we visited. Oh to go back.

Now I am really getting excited at the thought of our coming visit! I hoe there is still some snow about in early November - but not to drive through! Cheers, Robin

What a beautiful place to get away to! Thanks for sharing.

Beautiful images Dale - love the beaches and driftwood. Those Kea look a bit bigger than our little sparrows or starlings who frequent all our outdoor refreshment areas!