Ian's new camera and a bit of play 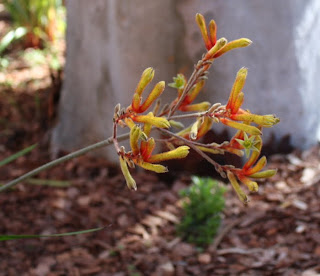 Ian has bought himself a lovely new camera and spent a fair bit of time playing with it. It's amazing really how things update so fast and what you thought was the latest, now looks like a heap of crock. I remember many years back when we both flew to Sydney and the boys stayed in Reefton with their grandparents and flew over to Melbourne where we met them (flying alone aged 7 and 8  - today we would probably be called negligent parents or something) - it was the time of the underarm bowl which no Kiwi could ever forget and we were amazed when so many Aussies kept apologising to us. I digress - what I mean to say was I bought Bruce a little digital (I think) game which seemd so modern. I wonder where it is today. But Ian has been in the garden photographing some of the kangaroo paw flowers and practising. At top is our original one which has been in flower for a while but the others are all the new ones - it will be a very vibrant garden of paws before too long. not to mention the bulbs which are bursting to appear - no no - not yet - it is only August I cry. 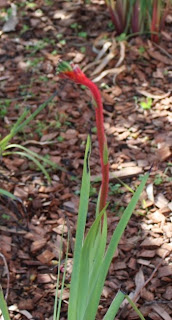 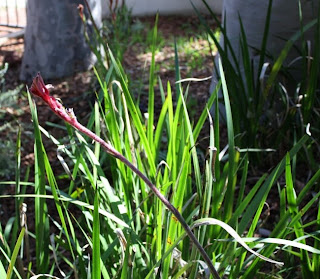 The rest of my pics are from my i-phone - the new toy battery is charging...... 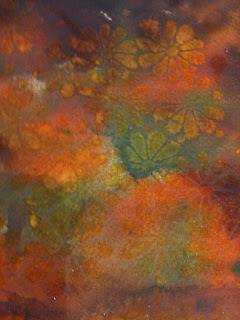 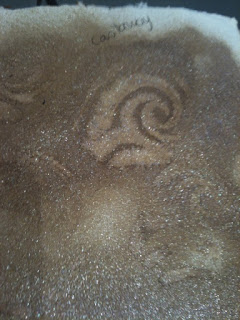 I have read a few comments about the Castaway stamp pad - can't remember where and I thought I would get it out and see if it still works - I think someone said it wasn't playing ball.  This one I sprayed kahdi rag paper with Colorwash and then used a daisy stamp and Castaway - it came out quite well - the pic doesn't do it justice. Then I tried it over Moonshadow Mist with parts of one of my new polymer stamps. I thought this was quite effective. I use Versamark for ghost images but the Castaway gives a slightly more definite image.

Next I thought I would do some digitizing - I told someone at the show in Perth that I was good at digitizing letters - not particularly good at other digitizing. You learn what you need to know for what you want to do. Just imagine how overloaded your brain would be if you learnt it all - that's a good excuse anyway. In fact I had forgotten and had to get the manual out and start all over again.... Practice does tend to help with anything. That's why when you learn the piano you need to practise.... Anyway I want to make a word wrap around for my stitchy stonehaven journal so that was my reason. Any genuine digitiser would choke seeing my efforts - my stitch leaves spaces etc but that is the effect I want - then I can burn into them with the soldering iron. I am using rayon - Stonehaven naturally - don't use cotton or polyester as your good work will be for nothing. 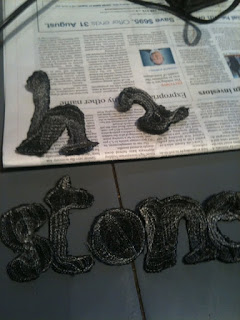 The picture is not that clear but I stitched a number of letters (I like letters and words) and burnt them out with my new toy - I have been busting to use it. This is the Creative Versa-Tool, available in north America for a number of years and soon to be available down under. We have been in negotiation with Walnut Hollow and are having our own made to Australian and New Zealand specifications. They should be here in early November. They sent me one to play with - I had to get a transformer for it of course as our ones are being made right now. It has 11 different interchangeable tips, is very sturdy, has its own stand and comes in its own carry box. So much better than the one we have been selling previously. It was a long hard decision as we had to buy a huge number but I think it will be worth it. SO many people have asked us about getting a good tool in. Ian is very impressed with it and that means more than my opinion because he looks at things thoroughly. I just get carried away. We are not sure of the price just yet. It also enables you to cut stencils which I hope to try this week. Too exciting for words. 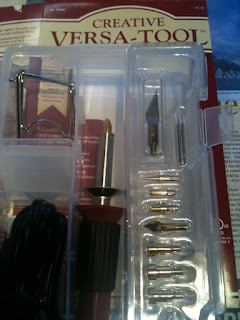 Evelyn - thanks for the comment about hands-on workshop. If I get enough people I will run one in November.
Posted by Downunderdale at 5:10 PM

Your garden pics are stunning - Ian's camera must be good. It will be lovely seeing your plants coming into flower as ours die down for winter. I love your Castaway samples. I have a Castaway pad - thanks for reminding me! The Versa Tool looks a great gadget and I love your letters.

i keep looking at the castaway stamp and wondering if I need one, perhaps, and another tool to have! I dont dare look at the catalogue, but it is all fun.
At the Festival in Adelaide they have a tent called The tent of earthly delights, perhaps that is what you should be called! Not The Thread Studio at all, but I imagine you might get a lot of spam.
Your kangaroo paws are looking good.

Love the work your doing and your Kangaroo Paws, we have one quite quite hardy Kangaroo Paw that grows here, we live in hills behind Burnie and its mostly a cold climate garden but up they come every year. My King Alfred daffodils are out already. Like the tool.Lucky Ian with his new camera.