mothers are allowed to brag 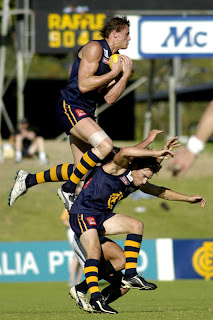 If mothers can't brag then who can?

This is Bruce's award winning photo - one of the things he does is to take photos at WA Aussie Rules games (WAFL) and he won an award for this little number - I am not sure what the name of the award was but you can bet I will tell you when he tells me! For those who know about Aussie Rules - that is Michael Gardiner at the top - he used to play for the West Coast Eagles but I think he does not now.

I also think we might have some rain tomorrow morning - hope everyone else in Aust does too.

Ian has just had his phtos from Wales developed and the contrast beween the beach at Long Haven and on Waiheke is very interesting to say the least.
Posted by Downunderdale at 8:11 PM

Congrats to him! It's a very cool photo! I really like the composition.

No wonder it won Dale, its fantastic, a very powerful image