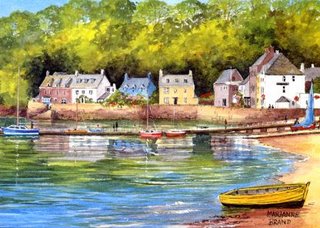 Very exciting to visit a place obviously named after you. Actually, I have never liked my name - I was named after a racehorse called Dexter Dale from which my father collected a decent amount of money at the races when it won so he must have thought it would be okay. However we had to go there when we were in Wales. This card I found in a shop - it was painted by Marianne Brand who has also produced a lovely book of prints from around Pembrokeshire "An Artist's View of Pembrokeshire" which we enjoyed using as a bit of a tour guide. Ian took a photo of me standing in the doorway of the Dale Yacht Club but he hasn't had his photos developed yet. Dale wasn't anything like this when we were there as it was quite a wet and windy day but I expect it would be a wonderful sailing spot in the summer and the sort of place where you would love to go with your kids. The beach looked good too. The yacht club is on the right of the painting.

Great news here, and he really deserves it too, is that Paul Wilson, who designed the studio, told us today that the design won first prize in its category at the Building Design of Western Australia awards. We will have to make sure we do great justice to it with the landscaping.

I have moved about 3/4 of my books now - have to try and do the rest in the morning as Ian is planning to paint the second coat on the decking. They are looking quite at home and it's good to locate books you haven't seen for a while.

I was reading a couple of things on the web about silk paper making and I see plenty of people are claiming that they 'invented' and 'developed' the idea. Little bit laughable - I know it is not new and I first came across silk paper making at Bunbury Forum in 1995 when Nancy Ballesteros and Judith Pinnell were teaching a class. I fell in love with it all then and I know that I am the person who has introduced silk fibres to the public at shows all around the country and taught so many people to make it the way I saw Nancy making it with my own little twist. On quite a few occasions I have come across my own notes (minus my name) inside other people's silk paper making kits - I gave these notes away for many years! Live and learn but move on quickly to something new. Plagarism never goes away no matter what you do and there are other ways to grow an ulcer.
Posted by Downunderdale at 5:46 PM

still Dale it's an annoyance to be ripped off for sure. Glad you've got such a positive attitude though. I was so wound up when I saw a cropped version of one of my wildlife paintings reproduced on place mats. Words or pictures the morality is still just as broken.

There are some people without a concience out there, but as you said Dale, there are other ways to grow an ulcer. I don't see what pleasure they get for being credited for someone elses work. I used to knit wedding suits etc. in another life and the lady who sold them for me, took out my labels and said she made them. It was a long time time before I found out.

Life is unfortunatly like that, we discovered after John lost the last Mayoral election (thank goodness) that the female candidate had been making the most libellous allegations about him totally unfounded and not a thing one could do about it.
But it is very annoying.