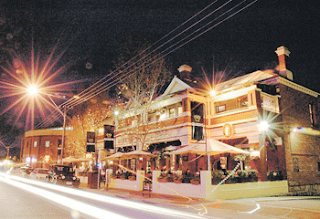 Known by the locals as "The Queens" the Queen's Tavern was built in 1898 and was originally known as The Queen's Hotel . The two storey hotel was originally built in Federation Free Classical Style and featured a gabled roof with a wide colonade verandah. Over the years the hotel has seen many changes and refurbishments. The most drastic was in the early 1990's when the hotel was redesigned by architect Michael Patroni and became part of the Matilda Bay boutique phenomenon. The trendy transition turned the traditional looking pub into the social heart of Highgate and Mt Lawley.Patroni took out several architectural awards for his innovative design.Built just prior to the tramline, the hotel was originally owned J.A.Gent. Following its opening in 1898 the hotel made news when two police constables from the nearby Highgate Hill Police Station were shot at by two would- be burgulars. As the burgulars fled the policemen, they tried to break into the hotel but became cornered. Today it still remains one of the areas most popular watering holes and it attracts people from near and far. The open laid back feel of the hotel makes it a perfect location to socialise in all year round and the front garden is the perfect place to spent a lazy day in.

We haven't been for ages but used to frequent The Queens quite often on the weekends.
Posted by Downunderdale at 6:04 PM

Sounds like a lovely place to unwind - I could do with a couple of weeks there!

Wow I didn't know all that stuff about the Queens. I used to go to primary school around the corner from the Queens and as much as I like progress I was a little sad when they did it up I much preferred it the way it was..but you cant stand in the way of progress or childhood memories. :)