Happy Valentine to whoever 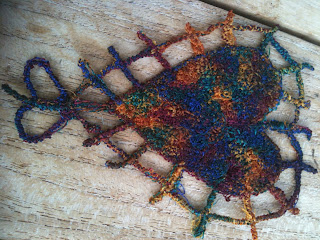 Something to share with you - Did you know that Cleopatra so loved the colour purple that she once ordered each slave to obtain an ounce of purple dye for her? The dye was derived from a special, rare snail and each snail produced only 2-3 drops. It took years for her order to be carried out as over 60,000 snails had to be harvested in order to produce a single pound of her beloved Tyrian purple dye.

The latest Studios arrived today and all the ones on the list have been posted out - there are a few left over if anyone is interested. Quite a few studios in California - not anywhere where we were I can tell you. One studio which really interested me was that of Isabelle de Borchgrave - she is the artist who creates so much fabulous work (lots of garments) using paper. Scrumptious studio as you can imagine. 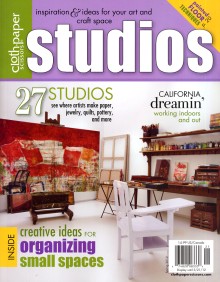 And for you, Judy, the saga of the one armed specs. Some of you will recall that when I woke in Melbourne in my little cell one of the arms from my specs had fallen off. As a result, I had a new eye test (improvement rather than decline) and a new pair of specs was delivered to me on Australia Day the day we flew to USA. For some strange reason I also took the one armed ones with me as well. 7 days later as we were returning to the hotel to catch the shuttle bus, I tripped over a large thing in the disabled car park painted in the same colours as everything else (Ian said even he would have tripped over it) and landed on my face breaking my new unpaid for lens in two. I cried and I also had a black eye, lots of blood, sore right side, cracked knee and anything else which might take your fancy. Just as well we had that lovely upgrade is all I can say. Anyway I just had to take them back (they said they had never had a lens break in half before), pay for them and wait and wear my one armed ones in the meantime. I picked them up yesterday and won't even say what the second lens cost but I did get a decent discount. Now my one armed ones have gone off to be mended.

I guess there are much worse things which can happen.......
Posted by Downunderdale at 6:04 PM

Poor of Cleo obviously hadn't browsed the internet enough to find The Thread Studio back then. I'm sure she would have been overwhelmed by your stock of all thing colour.

Will you stop beating yourself up now??!!?? Head, shoulders, knees and toes....

Gee Dale thats a terrible fall, I'm not surprised you cried! Glad your OK though and love your heart. Amanda I agree we are very lucky. Bethx

Ok, for now on, walk behind Ian so you will have something soft to fall on.

Your little heart is so sweet and to see lots of them pinned out together conjures up a lovely picture.
That fall you had sounds dreadful - I'm surprised you didn't break more than your glasses. It would have to be the new ones too. Glad it all came right in the end.

Sorry to read about your fall, at least you didnt break any bones, trying to look on the bright side. Interesting fact about Cleopatra, thank you!

Happy Valentines day, Dale!
What a lovely heart. That history about Cleopatra was fascinating, too!

I am so sorry you got hurt. I hope you are feeling better now!

Not a snail the shell s called Murex.
Your fall sounds awful, I would crtoo. Some glasses are not to be and some alway re bound, John had a pair he hated they fell out of his pocket, off a path, in a National park in WA he told the guy at th parks office,left his address, went home and got a new pair. The old ones arrived by post 2 months later! Still quite ok, some small boy exploring off the track had found them.

OK but you didn't mention the four letter word that you kept uttering did you.
On a brighter note -I love the heart.

What a trail of woe, and how awful to fall and break the new ones and damage yourself as well. I do hope you hve recovered and that's the last of the misfortunes to befall you. I took your link on FB to Isabelle de Borchgrave's website and took a link to her studio, it is to die for and so is her work. Look forward to my "Studois" mag soon.

I love Jacinta's suggestion that you walk behind I an so he can fall over!I also took the link to Isabelle de Borchgrave's website and drooled - it is now bookmarked. I am still procrastinating about paying for a spare pair of glasses..... Cheers