Pavlova and ice-cream and more 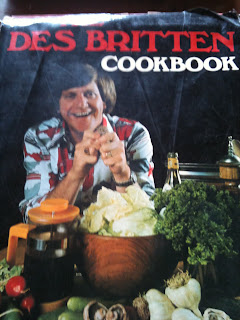 My mother used to make sponges - apparently they were considered top class sponges. They came out of the oven and were dropped on the kitchen floor which meant they rose or something - filled with cream and with things shaken through a sieve. As far as I can remember there always seemed to be one on the table. Visitors always said how wonderful they were but they never did much for me.

Pavlovas we had too but they were never an issue until my brother married Diana and she made gynormous pavs. My mother saw it as a challenge to do better but they never reached the dizzy heights of her d-I-l

Me - I must have started making pavs sometime - I used to use the recipe in the Edmonds cook book but then Des Britten ran his tv cooking show - I may not even have watched many but I do remember the one where he introduced a garlic crusher and the whole of NZ ran out the next day. When he did his ice-cream I do believe that the milks ran out of cream the next morning. This book was published in 1977 and over the years I have cooked many dishes but now only the pav and ice-cream.

Posted by Downunderdale at 9:46 AM

Someone at the guild was talking last Monday about a sponge cake recipe where you dropped it on the floor after taking it out of the oven.
Never heard of it until then.

Talk about a blast from the past! 1977 was my first year at teachers' training college. Des's cookbook was all the rage.

The reason for dropping the sponge on the floor was to get all the hot air out at once so the sponge didn't sink.