a quote for Sunday or any day

'the primary benefit of practising art, whether well or badly, is that it enables one's soul to grow' - Kurt Vonnegut 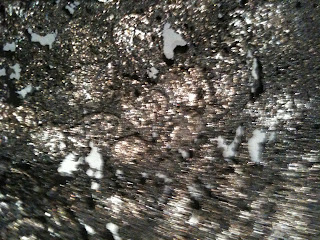 so true and sometimes badly means you can be forgiven for playing and experimenting and ending up with things which don't look so good. I am still pottering along with my kunin felt - this time I used black puff on black felt through the pebble stencil and swept paint over the surface before I heated it - I am trying for the fragmented distressed look and I guess I will only improve with practice.

I have also been pottering around with sari ribbon but that will come soon. Not much to show there as yet. The weekend has been full of lots of winding and more sorting and stuff and behind the scenes type jobs.

The rugby last night was exciting and the Wallabies deserved their win - hopefully a wake-up call for the ABs as it broke their unbeatable streak. I was not one who thought the choice of Stephen Donald to be a good choice and I would have much rather seen Aarron Cruden or Colin Slade being there but then who am I but a mere mortal.

This morning we went to Veritas for breakfast - Veritas has been bought by the Barolo boys and Alan was as bouncy as always - lovely breakfast though. Amazing how a change of chairs and mirrors and fresh flowers and colour can make such a difference.

And thanks for the emails about my hair - I am much happier again now it is its 'real' colour again. I once was blonde.....
Posted by Downunderdale at 6:56 PM

You achieve such interesting surfaces with your 'playing'. The fuchsia hair colour really suits you Dale. I was never actually blonde but was fair - now I'm very fair! Greyish white or whiteish grey, to be honest.

I didn't even realise the AB's and Wallabies were playing--that shows you how much notice I take.

I like the blurred effect on the right Dale, or is it one of Maggie's swoopy pictures!