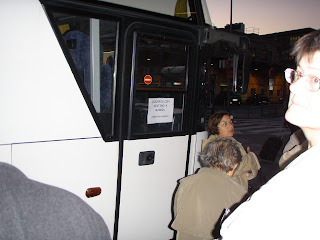 What could this be you wonder? So did we. After spending months organising a sleeper train from Paris to Madrid, we caught the train from London to Paris and rocked up at the Austerlitz train station to see not a mention of said train. When Ian finally asked he was told no train to Madrid and we went into a semi state of shock thinking we had been done when we bought the tickets on line. We didn't even think about what next? No explanations - no apologies but somehow 4 buses appeared and we had a long 10 hour trip to the border.
This sign on the bus door which reads Irin was the most info we actually received. On the way we stopped a couple of times at what we would call roadhouses and I know people complain  about aussie roadhouses but they have nothing on these places. Fortunately I have a bit of foresight to buy 2 rolls at the station before we hopped on the bus. The buses managed to get lost but they finally dropped us off to catch a train to Madrid and we arrived early afternoon desperate for a shower at least. Much harder for those who are passing through etc and we chatted to a coupleon their honeymoon - they won't forget the night! 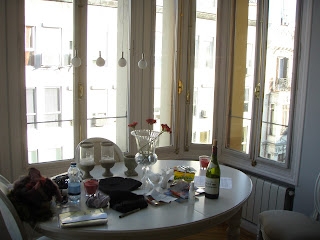 Anyway we are now in our lovely apartment in old Madrid - on the 6th floor and this is the lounge looking out onto a great vista. Slept well last night after tapas and Rioja. 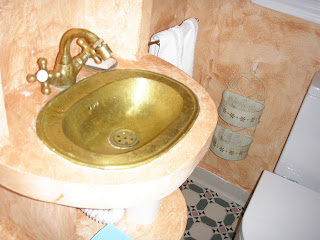 One of the toilets is very Morroccan and I have claimed it as my own. Stain glass window and a a tiny hand basin. Now that we have sorted out how to turn the elements on we have had our coffee and done the washing and we are off to explore. 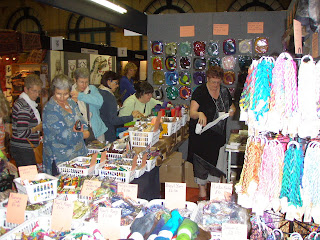 Ally Pally was wonderful as always - our stand looked glorious with all of its colour. We only ever have  a tiny stand and it always seems strange without all of our stuff but much of what we had certainly has gone to new homes. 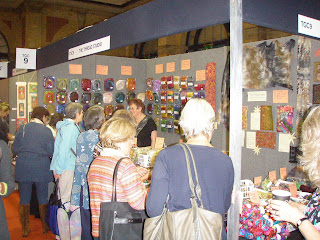 It was fabulous to catch up with our friends and enjoy meals out etc - Annette and Terry came on Sunday night - they took our big suitcase away to store until we get back. Very difficult to do the internet in Muswell Hill but we are back to normal now and I have answered all the emails and cleared the decks.
Off to explore today but after a second cup of coffee.

I have found quite a few new goodies which I am very pleased with - see what we see here.....
Posted by Downunderdale at 4:58 PM

Not the journey to Madrid we all hoped for you and Ian, but you got there at last and the apartment sounds amazing. I'm surprised you have to bring anything away from Ally Pally reading the blogs of those who have shopped there! Glad it all went well - your stand looks great as always.

What an experience that was! Roadhouses in Europe are awful - the queues for the loo!!!! Your Madrid apartment looks to be making up for it all, hope you have found lots more fabulous goodies by now. Cheers, Robin

Glad you have somewhere lovely to stay in Madrid after your marathon journey. So sorry not to have made it to Ally Pally again this year. From the look of your stall it would have been an expensive experience ;) I shall have to start planning for next year.

I find it hard to imagine you in such a small stand Dale--hurry up and come home.

best laid plans....
Lucky you can go with the flow.