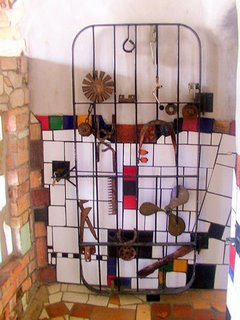 I have been reading about the problems in Kawakawa with tourists taking photos in the toilet there all the time. Isn't this a fabulous picture of part of the inside. Clever man, Hundertwasser. Sort of the gate to lock up at night? Layers yet again.

Good rugby this weekend - watched the Wallabies beat Ireland and then the video of the All Blacks vs Argentina - what a pedantic ref - liked the sound of his voice and was enjoying practising his whistle blowing and arm waving. Fortunately the ABs won. The soccer is absorbing most people but it can be pretty boring and each half is longer than in rugby. Having said that, there have been some little exciting moments on the replay on SBS before the news. I think we might watch some of the game tonight - Aussies might win.

Ian has put the sink and bench together almost and I have popped my dummie all dressed in Princess H and a vase of irises in the studio. We are hearterly fed up with this painter and will resort to finishing ourselves if he doesn't appear. And not pay the extra. Even the builder can't get hold of him on the phone.

Back to unpacking and sorting.
Posted by Downunderdale at 1:15 PM

I Dale, I found a great little book on Hundertwasser when I was in Qld so now know a bit more about what you are on about. He was interesting and I love the colour.