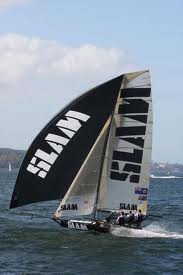 Yesterday - Very frustrating times - both of my printers have been dead although they are now back in action and my email programme wouldn't allow me to reply and then it started sending me multiple (up to 20) of every email so in disgust I closed the system down and we had a bbq instead. As a result one of the POMs has not been sent yet and that one will go on Monday - sorry folks.

Then because of the Qantas drama in Singapore (that is the connection we start from London and then hop out in Singapore and hop on the Perth plane), Grant's flight from Singapore was very late leaving and Ian had to set the alarm to go pick him up at 2.30am. I think as a result of these two happenings we have been fairly laconic today and I haven't finished my next what you can do with sari ribbon piece. Better get a move on.

In 1992 when we did our BIG trip to Europe, our plane leaving Perth (only had 2 engines) lost one and we had to re-land without even dropping off the fuel. Think it was more serious than I realised - I was just annoyed because no-one had brought me a glass of wine for my big OE trip. However, like falling off a horse, you get back on quickly or you would never go anywhere.

Grant is down for the weekend because it is a BIG birthday for him (he is growing old faster than we are) and tonight we are going out on the Swan River to watch the 18ft Skiffs twilight race. Hence the photo of Slam although he is not sailing but this is to remind you what his 18ft Skiff looks like. We went to Veritas for breakfast this morning as well.

Better get back to work or we will be late for the ferry. Will have stitchy stuff for tomorrow.
Posted by Downunderdale at 3:35 PM

Hope next week will be smoother for you. I thought of you when the Qantas news broke here - the pilot and crew kept their cool and all was well. How we take them for granted most of the time, and what enormous responsibility they have. Happy Big Birthday to Grant, and I'm looking forward to seeing the stitchy stuff.