I don't know why I ever say I will be back the next day. We have been very busy with normal orders and 350 Quilting Arts 22 coming in and going out. That's a lot of pushing numbers on the credit card machine. However, this latest issue is another very good one so it is worth it! 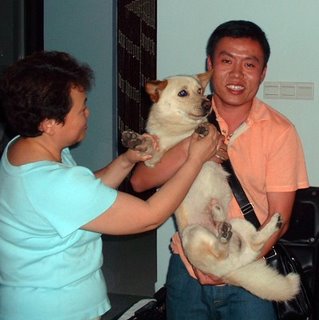 To China - we had a wonderful week - flew to Hong Kong and stayed overnight in Kowloon and then caught the train to Shenzhen to see our thread people. Here is a photo of Kelvin and his mother whose name I only know in Chinese characters and one of their three dogs. They invited us home for dinner and we had a wonderful night. Jonathan and Mrs J don't speak English and we don't speak Chinese so Kelvin does all the talking. Shenzhen is a bit of a snake pit and not the best place to have a holiday but the hotel we stayed at was very nice. We managed to avoid the typhoon which was expected to arrive at 3pm and we flew out to Shanghai at 1pm. It was predicted to be the biggest May typhoon for 50 years but fortunately was downgraded to a storm but still in Southern China over 1 million people had to be evacuated (to where?) and they are still having rain in Shenzhen Kelvin tells me. 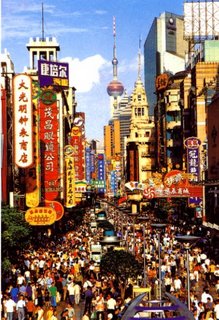 Then we spent 4 days in Shanghai like wide eyed kids. It was a great place - the cleanest city I have ever been to and despite the fact that there are over 15 million people there are lots of parks. Here are 2 postcards which we found - you could get a rolex watch every 5 metres of walking but postcards are like gold dust and we were only approached once with them and then he seemed reluctant to sell us anymore than 1 packet. The first one is of Nanjing Road which looked just like that - it is or was the biggest shopping street around and very glitzy at night. Ian has taken photos but I will have to wait until he has them developed. I forgot to take out my digital..... It was packed like this all the time but wasted on us as we didn't buy anything. We were staying near the centre of town and only one street over from here. 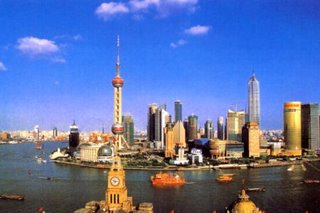 The second postcard is of the Pearl Tower on the Huangpu river. We traversed under the river in an underground train - amazing. Laser show and fairy lights and a great combo of purple and greens which I want for a new thread. We didn't go up the tower but wandered around. The first whole day we had in Shanghai was very wet, very cold and very windy due to the storm and we only managed short hops in taxis but the following days were as hot as can be. On the wet day I carted Ian to the Pearl markets and found some lovely small square sequins which I have been after for some time. Anything to weigh his suitcase down. The other days were extremely hot.

Being good rugby supporters we managed to find an Irish pub to watch the 2 semi finals in the French Concession. If you go to Shanghai it is a beautiful area to visit - reminded us of Europe.

More pics etc coming soon (note I haven't said tomorrow). My art to wear beckons with anxiety and I need a fairy to come in and package and pack for Darling Harbour. Lots of wonderful ATCs here though and if you haven't made yours and sent them in, don't be put off. It is going to be a wonderful display. By the way, the electrician came and fitted the last light while we were away and for me to be able to move in only needs the painter to spend about an hour finishing off inside............
Posted by Downunderdale at 1:29 PM

China , I think is a very fascinating place and I would love to go there but only for a holiday.