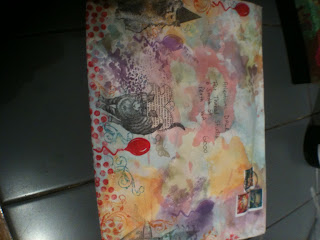 The dastardly neighbours with the yappy dog have moved out! Yeah. Although they couldn't drive off without a final dig but who cares. They can go and annoy someone else. And it reminded me that I received a lovely parcel when we got back from NZ and I had almost forgotten it as it had crept underneath a few things. Not sure who sent it but thank you so much - lovely envelope indeed. 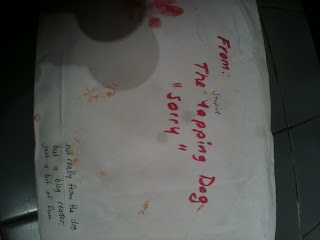 and the back - it really cheered me up but most importantly - 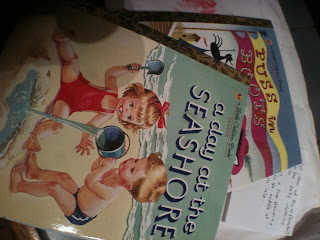 inside were two Golden books - thank you so much - they are going to feature at Ally Pally so if you are coming, look out for them. 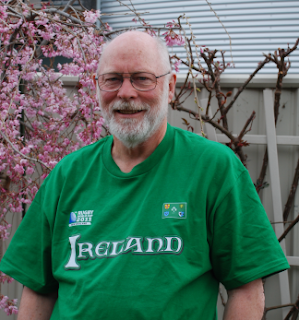 As you can see, our friend, Rory, is very happy about something - what could it be? Well I didn't take a photo of Jonathan but I can tell you he was not a happy chappy at all - why? Well - the Wallabies lost the rugby to Ireland yesterday and it has changed the situation a bit for sure. We have had a great weekend watching rugby - there have been some very good games - watched Georgia play England and didn't they do well and we watched Canada vs Les Bleus and they were pretty good too - both teams just got a we tad exhausted before the end.

In between the rugby I packaged yarns, fibres, machine threads, fabrics and am making steady headway for the London boxes which go on Thursday.  I have lots to do still but I also have a variety of creative things to be doing so I shall be up bright and early tomorrow and in fact all week to try to make inroads. I am busting to try the Rust Easy fabric - got as far as organising my photos on my computer but that was it. Tomorrow....
Posted by Downunderdale at 6:59 PM

Good riddance to the yappy dog and it's owners and 'Well Done' to Ireland. Sorry about that, but my birthday is on St.Patrick's Day so I feel I should support them.
Love your parcel and intrigued as to how you are going to feature the contents at Ally Pally.
Just had my first play with the Flower Stitcher foot - your little book has been such a help and inspiration. So easy to follow and much better than the official instructions. I love the effects I got with the utility stitches - almost better than the decorative ones.

Looking forward to Ally Pally - see you there!

Three cheers yappy has moved, and you have had a rugby saturated few days. How lucky are you getting a couple more golden books, sounds like you've had a good weekend.

Is the recipient on the UK of a totally b*****d neighbour who I would have literally shot had I been in possession of a gun (no I am not joking) I can empathise with your joy and rapture! Enjoy