I have been to Geelong and am back again. Didn't take my camera so no pics but I went to Geelong forum and it was really lovely to catch up with so many people. Really busy - I flew in on Wednesday afternoon and there were 3 ladies waiting for me - I had to open my suitcases and unpack my 16 boxes..... Thursday was non stop and Friday and Sat morning very good. When I arrived in Melbourne I got a call from Qantas to say my return flight had been diverted through Adelaide because of the AFL finals which meant travelling with either very happy or very sad but mostly well oiled Adelaide passengers and sitting on the tarmac for an hour or catching a later plane both of which meant missing the rugby games so with a bit of sweet talking I was changed to the 3.10pm flight and got the very last seat. What this actually meant was that I had to pack like crazy, finally getting away from Geelong at 1.15pm. Got to the airport at 2, got stuck in a queue trying to pay for the petrol top up, dropped off the car but there were no trolleys so I had to piggy back 3 suitcases to check in, waiting in a queue at check in, finally getting into the Qantas club at 20 to 3, collecting a glass of champagne and a plate of salad, phoning Ian but being cut off as the mobile ran out of money, and sitting down to relax just as the call for the plane came up. I stayed to finish then took off for the plane (always at the furtherest away spot), decided to have a toilet stop and seeing the long queue for the ladies, hobbled into and out of the disabled toilet, ran to the plane - last on, sat down and the hostess announced that we would be late leaving beacuse the hot food had all fallen off the trolley and they had to wait for more.....Murphy's Law once again.

However the upshot was that I got to watch a great All Black's game and a very pedestrian Wallaby game and came back home to see Fiji have a great game against Wales. Here they are celebrating. The serious stuff starts next weekend with the quarter finals. We think we might need afternoon naps with the games being in the middle of the night. 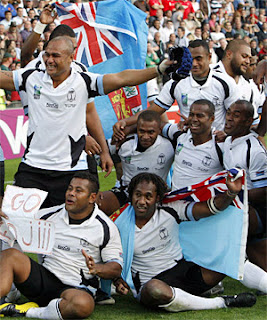 All unpacked now and starting to think about what to send to London for the Knitting and Stitching show at Ally Pally - the onahead boxes go on Tuesday so there is no rest for some. I have a few new goodies to take with me which I hope people will like. Lots to do tomorrow but it is a holiday here for something of another. I did get a little bit of stuff done in Geelong - mostly trying to get my embellisher sample book underway for taking to London. People seemed to enjoy my Book of Ink - I shall be working with the twinkling h20s this week.

Debbi has sent me a great little goodie but Deb, I have to work out how to make it a jpeg so I can post it here. Tomorrow......

Posted by Downunderdale at 9:45 PM

Hehe, only a dedicated rugby follower would go to all that trouble to watch the games. We had friends who were there; lucky folk. Now about next week.....will we(NZ ) still be thinking we are top dogs???
Could be interesting as we often fail at the crucial test! Go ABS!!!

Looking forward to seeing you at Ally Pally - what ya bringing?
Paulene