Love a tree because you never know 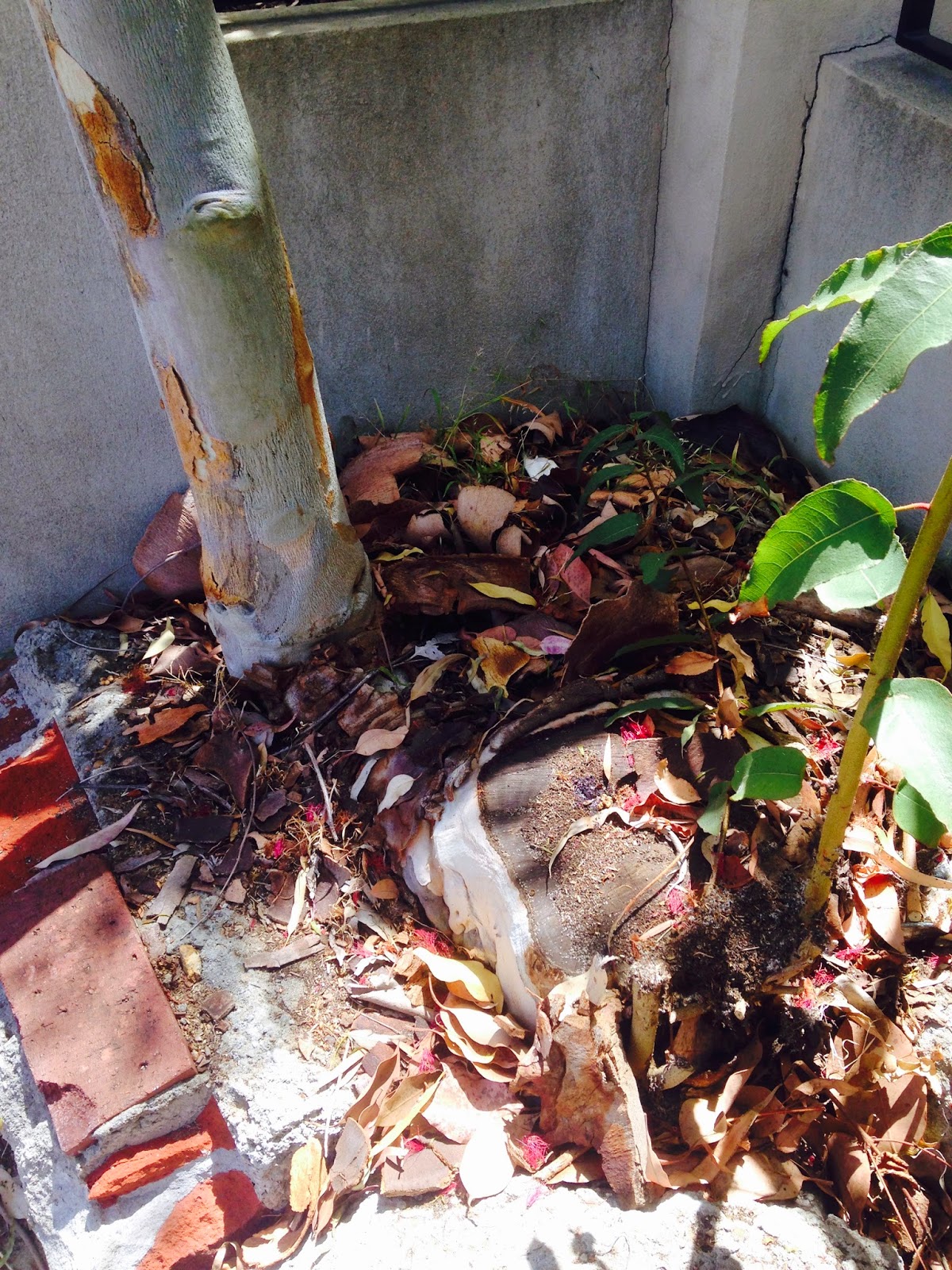 I am writing this blog entry because I want it all on file. If you don't like trees or don't care, just click off!
Look at this tree stump which never dies. When we bought our house 22 years ago, we had a garden full of growing and large Eucalyptus trees. The ones in the front garden we have slowly topped as they grew unsafe. I hate it but I know it has to happen. But trees are so precious - just imagine where all the birds who frequent our garden would go if they were not there.  This one is just outside our gate and we actually had the tree man (we use Tree Wise Men and they are fabulous) drop some poison in it but it is a survivor and new shoots sprout as fast as. We let one grow a reasonable amount and then chop it down and lo and behold, another appears. It is surrounded by very large bricks which are impossible to move - they arrived after our front lawn on the verge was redone. 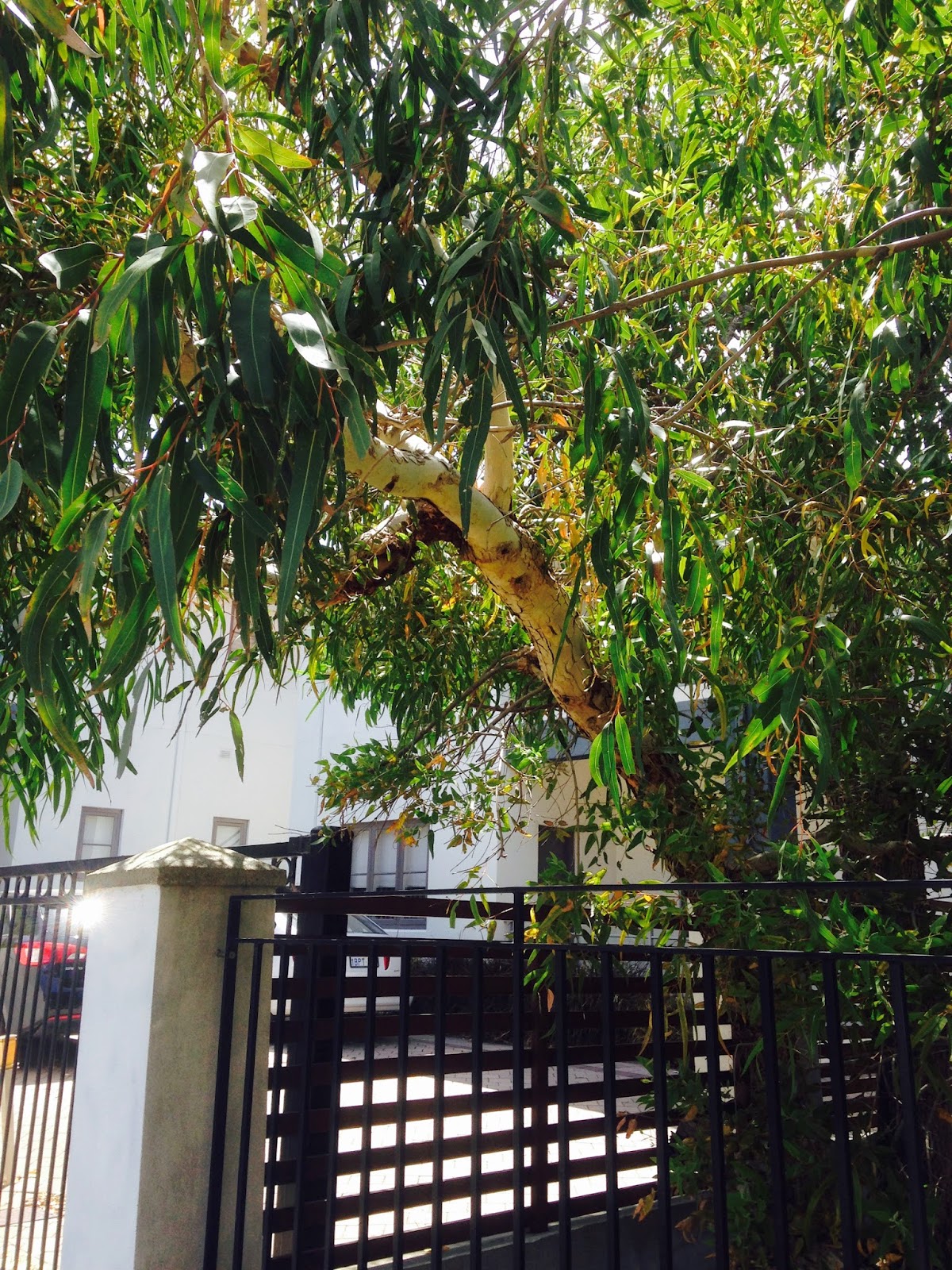 Just inside the fence is another beautiful tree which has lemon flowers and those red seed pods which a lady collects to use in her jewellery. We keep an eye on this one but it is not a tall grower, just a hanger over. It smells wondrous after any rain. 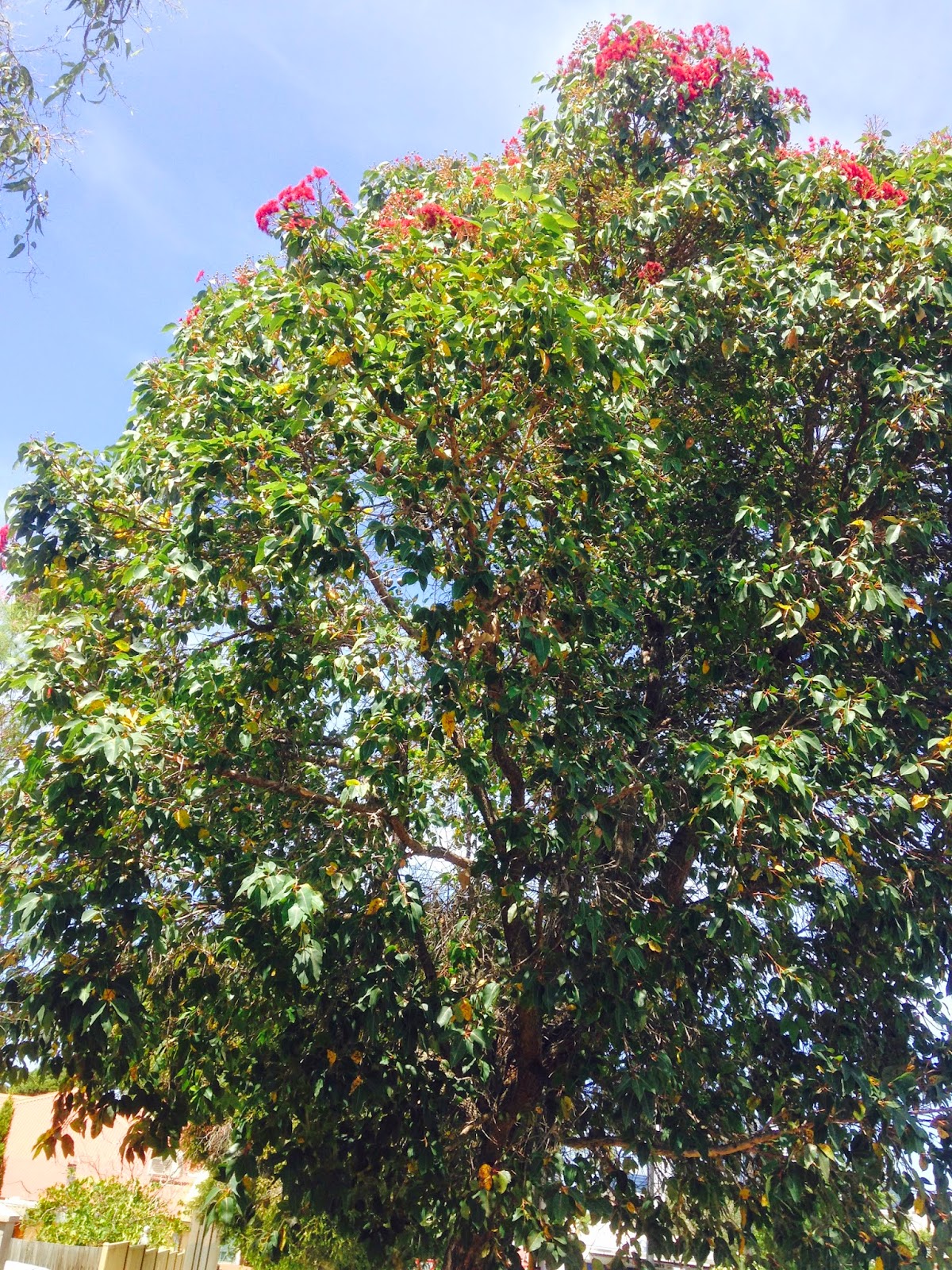 This magnificent tree is on our verge - it has those wonderful red flowers and is a native of WA - note - I never remember their names. It drops a lot of leaves on our front lawn but you just rake them up. Not the end of the world in order to enjoy it in its glory. 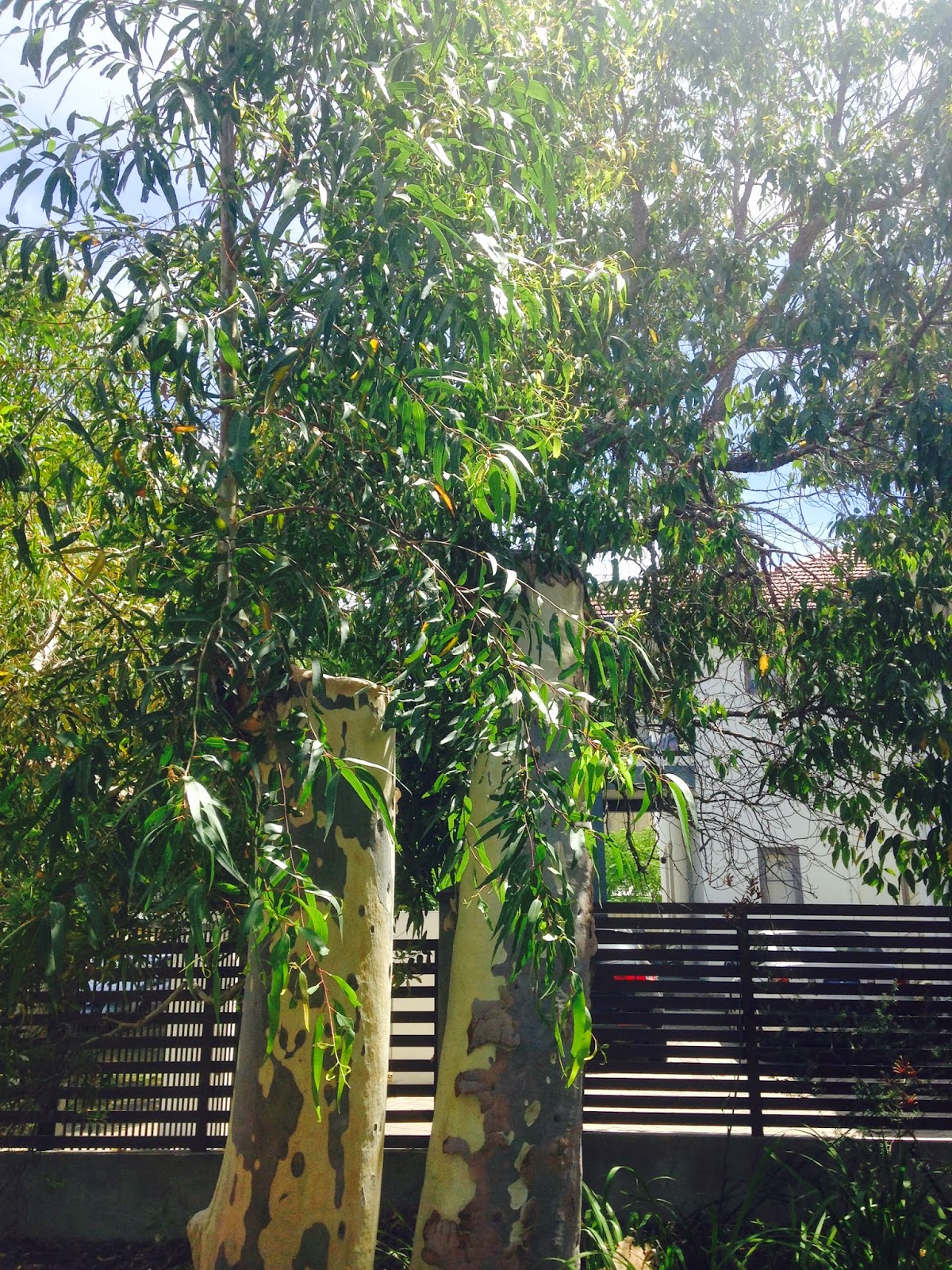 In the front garden we have two which grew very tall and have each been topped off at different times. They are hardy and by letting a branch grow it keeps our shade and anyway they are beautiful. They all have loads of bark which you have to gather at bark dropping time and I did make paper one time with it - hard work though. 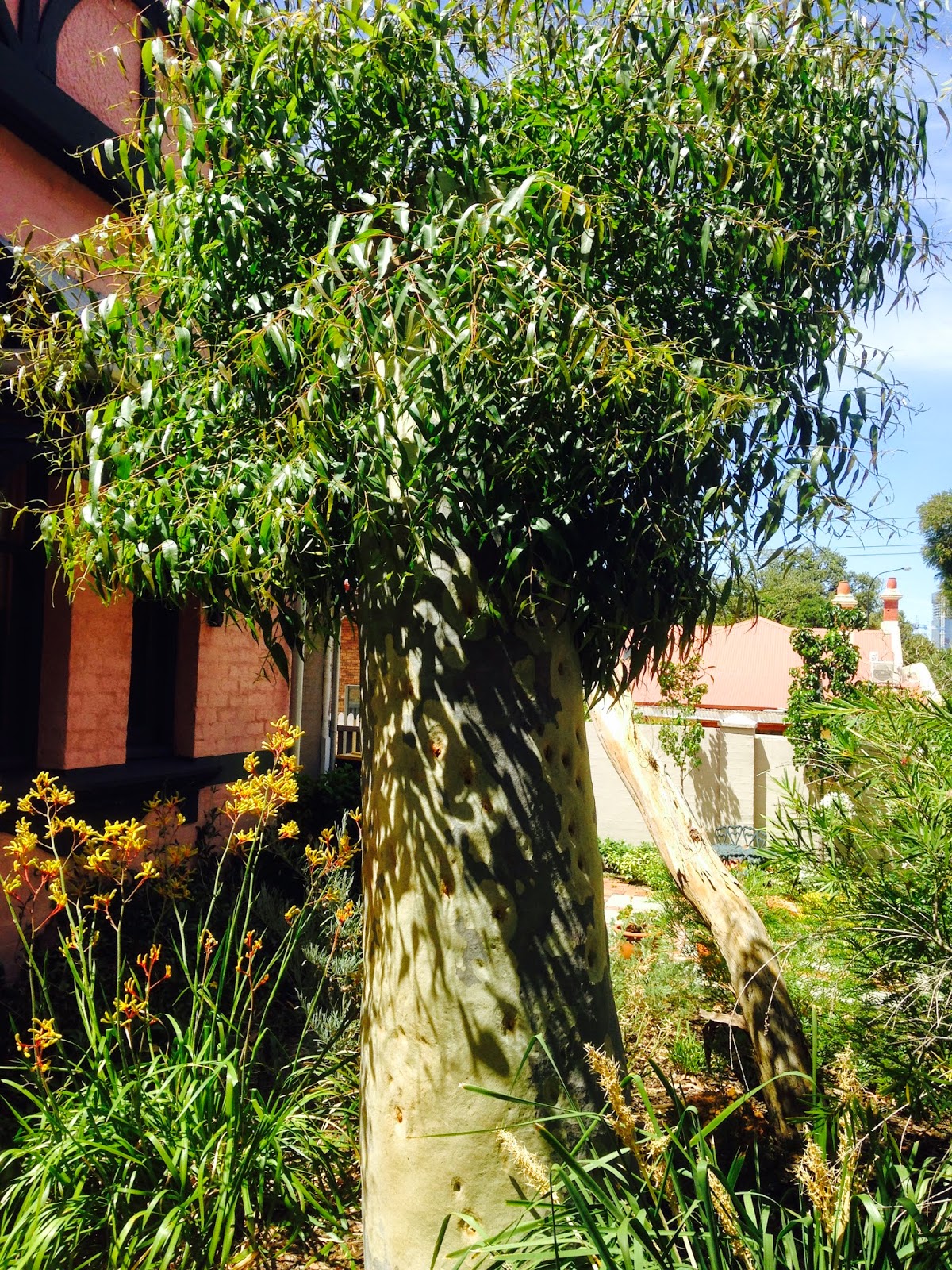 Also in the front garden is the latest one to have its head chopped off (the arborist was horrified) but it has grown a mop like topsy.  It's happy - I was not but I know it has to happen. The kangaroo paws and grevilleas in the front garden are all very happy and so are the birds. 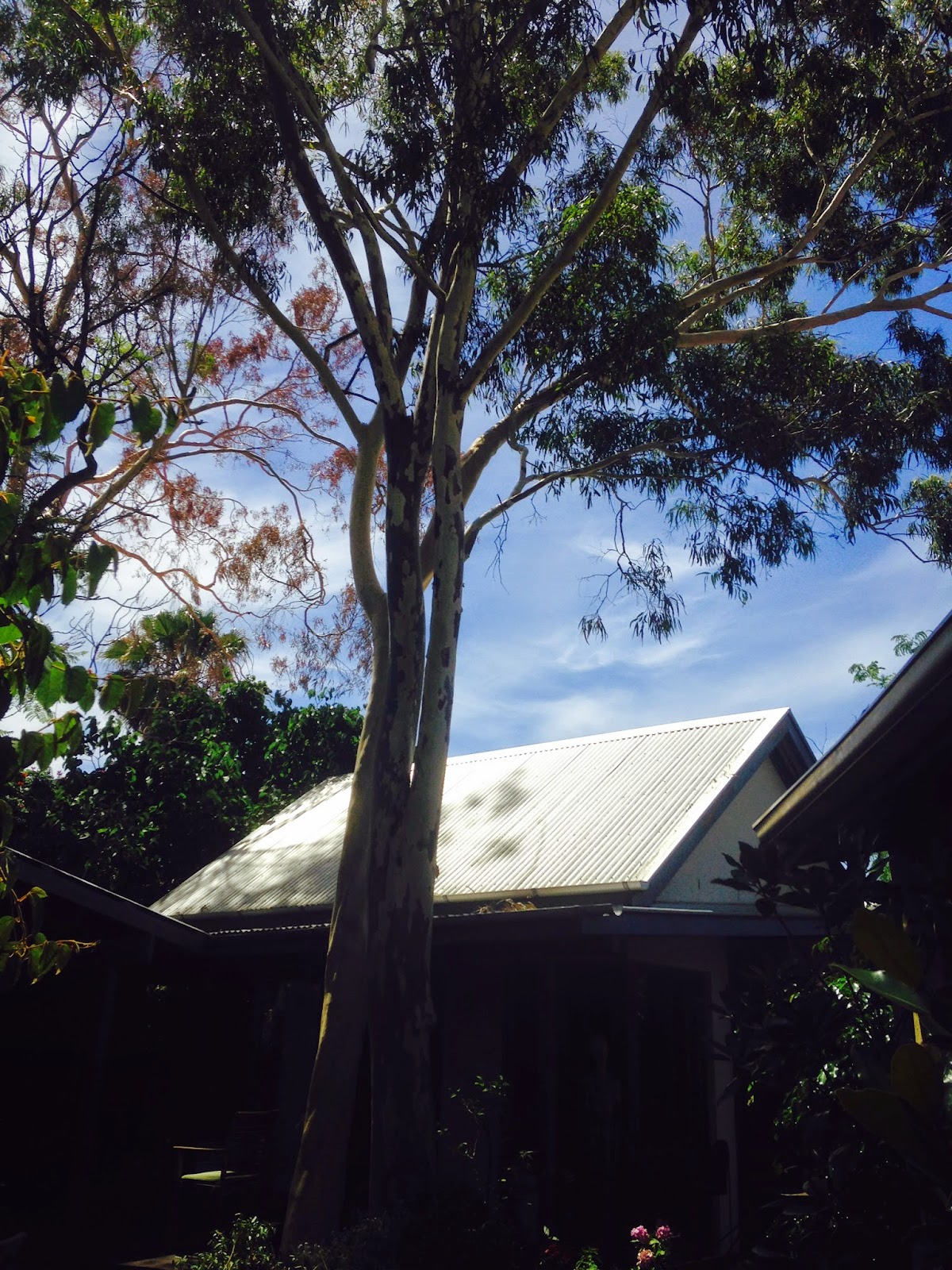 In our back garden we have three wondrous lemon scented gums. These ones are in front of my studio - sorry the light is wrong because the sun is in front of me instead of behind. But the studio was designed to fit with them - they are magnificent and we love them to bits. Of course they lose leaves and limbs and bark but that is the price you pay for them. If you didn't like them you would live somewhere else, wouldn't you? 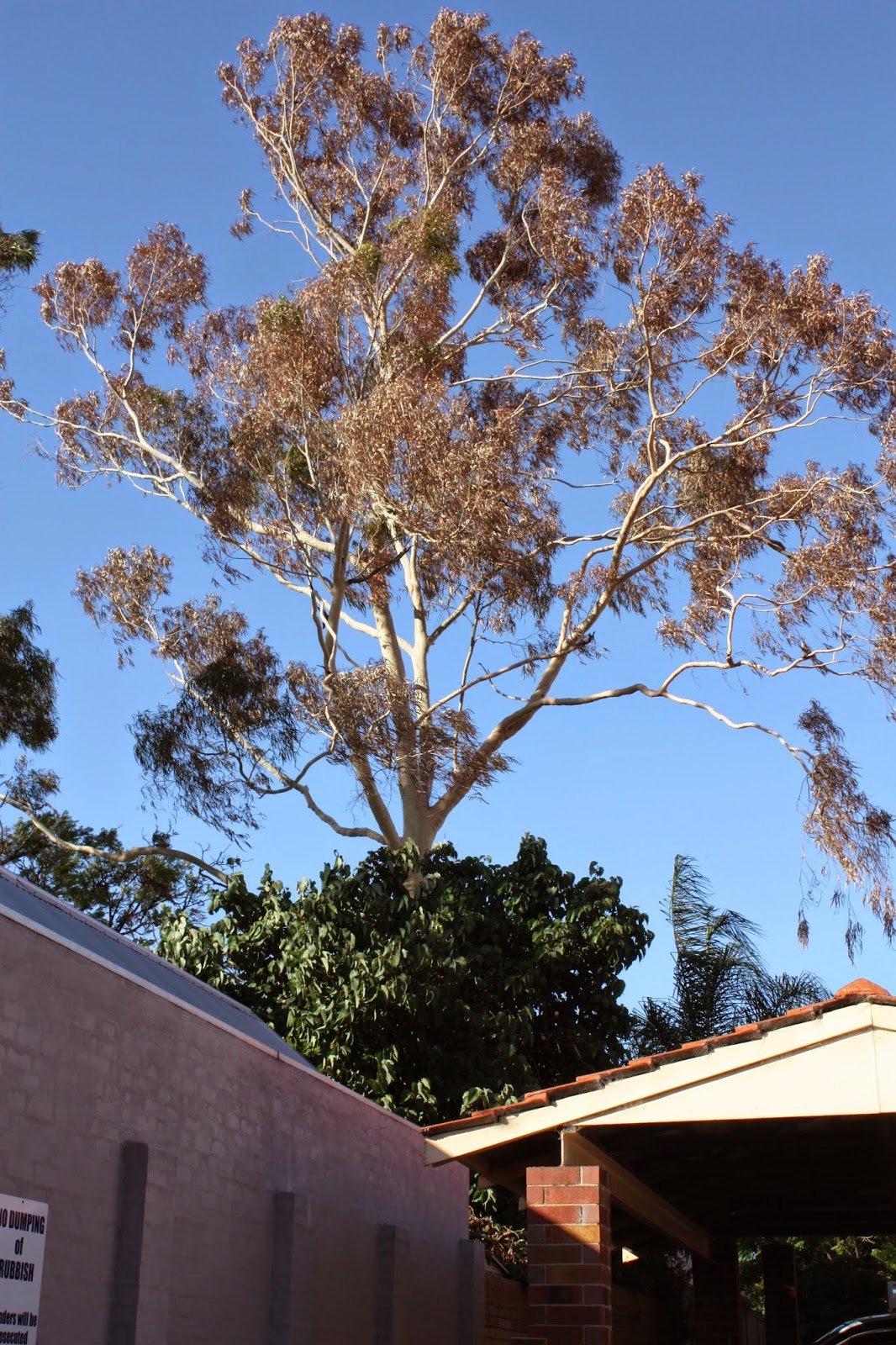 And in the corner of our property at back is their big brother - what the Vincent Council called a magnificent specimen. When we returned from our week in NZ, Ian noticed that this beautie had a lot of dead leaves and put it down to the water not being on up there at present. He asked our friend Gray, who is an arborist and he thought it sounded stressed and may have been disturbed by things happening. So we started pumping water in and feeding it fertiliser.  Below it is our lovely mulberry tree full of mulberries which got very excited about the extra water coming its way. Just after we discovered this, our neighbour called over the fence asking if we knew the tree had died. Interesting comment because two days later we received a letter from the strata company telling us the tree was dead - false - the tree was falling over - a fanciful false idea - and we had two weeks to remove the tree. Ian replied and we kept watering and feeding. After two weeks on a Saturday, Grant was here and said it was probably poisoned - we said NO - who would do such a thing? But with chair in hand, he popped into the right of way between the properties - we have legal access which someone paid plenty for back in 1900 or so - and looking over the fence and discovered that indeed two holes - 3cm in size (that's tradie size for sure) had been drilled just below the fence line and covered with debris. 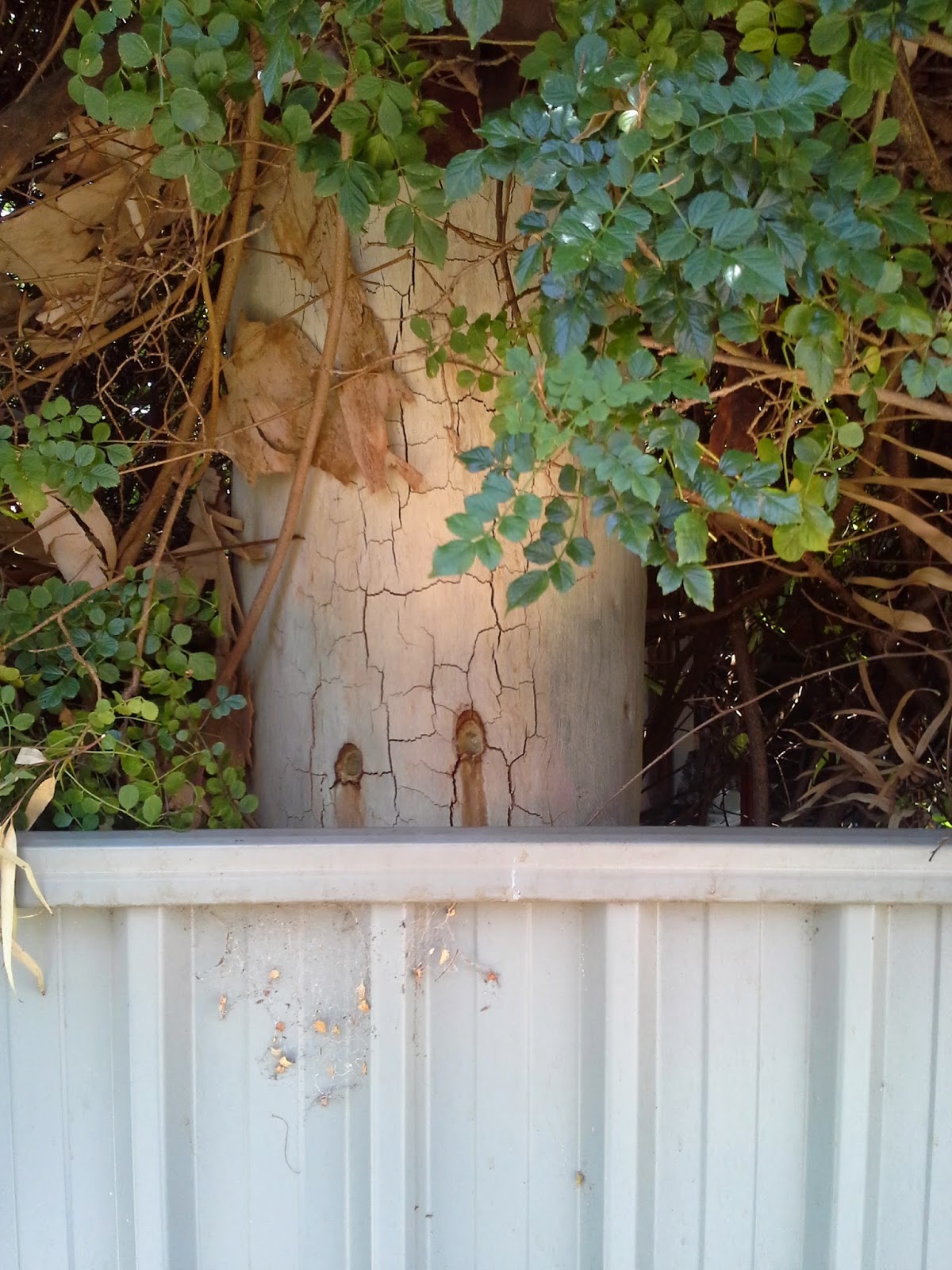 There they are - horrifying to think that someone has done this and it must have happened when we were away. A large drill bit makes a reasonable amount of noise when in action. Now - we are pretty sure we know who did it but cannot prove it of course. A nasty, malicious, evil sort of thing to do. An unhappy person it has been suggested. 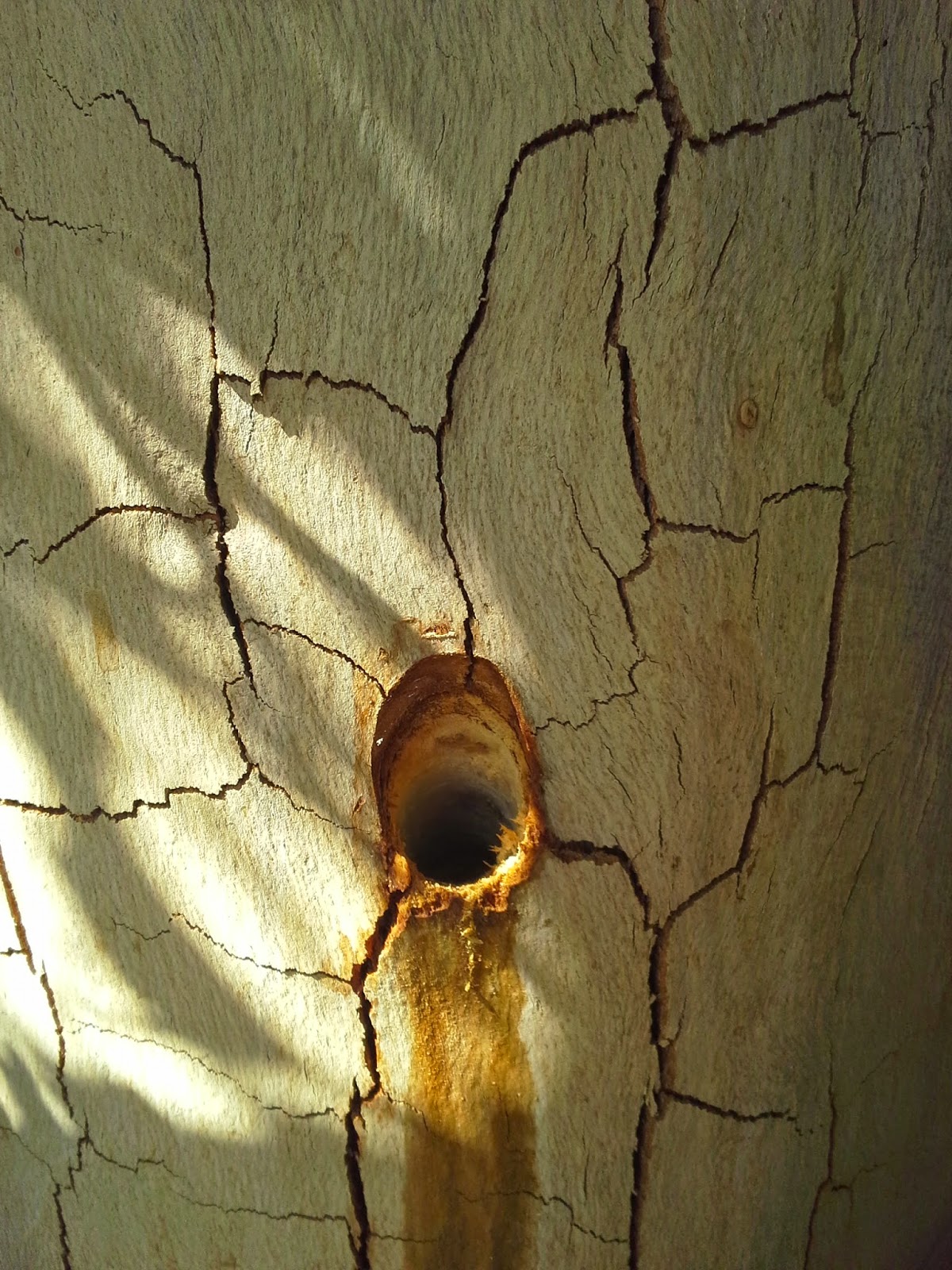 Here is one of the holes and you can see where killer of some sort has been poured in. So it has been a stressful time and that is why we did nothing much leading up to Christmas - The City of Vincent has been fabulous - the Manager of Trees and Parks and Gardens came around and was horrified - they recommended an arboriculturalist who has also been wonderful - he came and assessed the tree and drilled loads of holes and filled them with food pellets. I have learnt more about trees in the last week than I ever thought possible. The Police were also fabulous when we reported it (probably a nice break from the stuff they were dealing with). 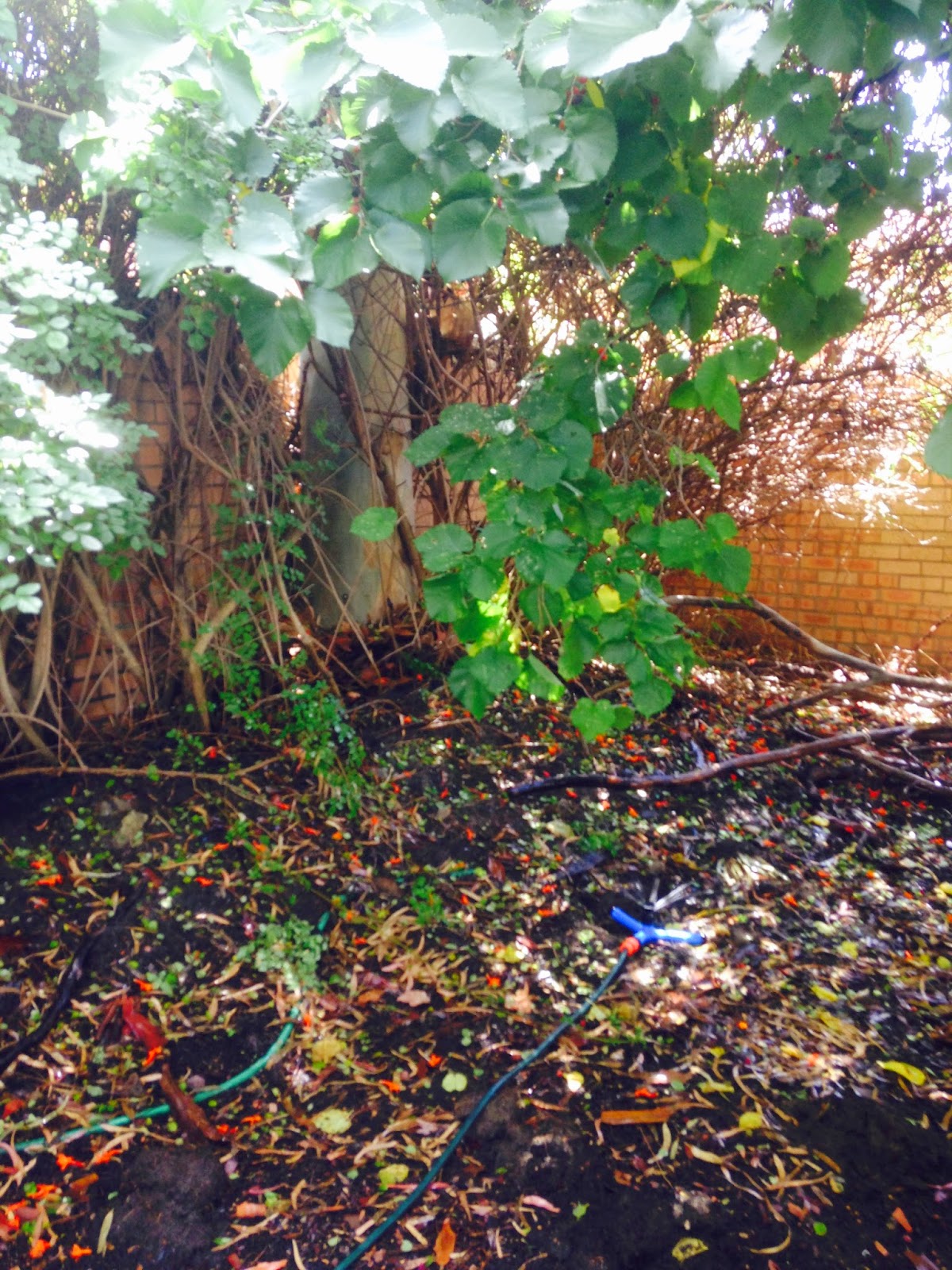 You can't see it very well but this is the bottom of the trunk outside my studio with its hose splashing away 24/7 and yesterday we did the sugar and water treatment - can't help and anyway every tree needs a sweetener. I have my tree observation chair where I am watching the leaves and there are new coppery leaves appearing. I had always wondered how leaves appeared and where and when.

If you have stayed with me and read this far, thanks for your support - I have posted some of the offensive pics on my facebook page and I thank everyone for their fabulous support. It is something which we consider evil, nasty, malicious and quite unfathomable. Just because someone does not want to sweep up a few leaves. Incidentally, of course, since the tree was poisoned and dead leaves appeared, we have had more droppage than we have ever experienced.  And I never thought I would care so much about a tree but the birds are hanging in as well.

Posted by Downunderdale at 12:01 PM

Hi Dale and Ian, I have been following your FB reports and so hope your tree survives and that action can be taken against anyone who can do malicious damage like this.

Other Dale and Ian - I cannot begin to fathom why someone would do such a thing. It is totally beyond my comprehension. I sincerely hope the perpetrator of such a vicious assault is caught and dealt with severely.

Dale I so agree with you about trees, and find it despicable that anyone would go so far as to attempt to kill a tree on someone else's property. We planted many trees on our 4 acres when we moved here 25 years ago and our only loses have been to storms, which distresses us no end. You have been lucky with your council and police, cant be sure we'd get such sympathy in our state Fingers crossed that all you efforts will pay and your beautiful tree will survive.

Trees are wonderful living things and I can't understand people wanting to get rid of them. I imagine that especially in Australia they must provide much needed shade and shelter.

Isn't that criminal damage? And against the law? I hope the culprit has learned to leave alone, perhaps you need to put a CCTV camera on it?


oh the rotters! x fingers all your good care will help to give you & your tree many more years together

That's a rotten thing to do to such a beautiful tree, minding it's own business and just providing beauty for anyone who has the eyes to see it. I do hope you save it and the perpetrator has a terribly guilty conscious and hangs their head in shame...

really pleased that the tree seems to be recovering..... what a terrible thing to have happened to it.

Sorry to hear about your beautiful tree. You wonder what goes through some people's minds. I hope your tree recovers soon but I am sure you will nurture the tree back to its former glory.

Sorry to hear about the tree. I do hope it survives and can't understand why people want to kill such a beautiful tree.

It is one of the biggest failures of our education system that people don't realise the importance of trees and for that mater all plants which is without them we would not survive.

I hope your tree recovers and the culprit should be made to write an essay on the importance of trees to live on earth!

I hope my newly planted Sturt desert peas flowers as well as yours.

Actually brought a tear to my eyes. Whilst horrid things are happening else where in Australia and the world it's a terrible thought that someone would go to these lengths to plan such an attack. I truly hope your tree survives.