Not a good week you could say 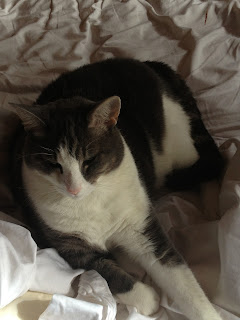 This has not really been a good week - first the car, then we got a parking ticket on the hire car for apparently parking in a street nowhere near here and this morning Harley was most unsettled and in fact is traumatised and staying in bed. While we were watching George Gently (yawn), some luscious person broke into the studio and stole my laptop and created more havoc than is already there. Just had a nice forensic man dusting and photographing. I told him I could lie and say it was immaculate beforehand but thought better of it. One of the things with finger prints on was a pack of fake $100 Canadian notes which Lexa gave me when I was in Canada. So we did not need that as well. And we have to be far more vigilant because the policeman did remind us we live on Smith Street where nasties wander and actually reside as well..... 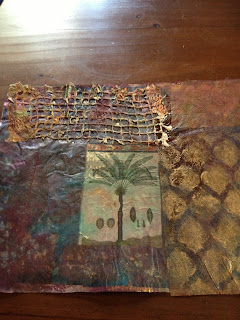 It's meant that we have wasted a day feeling sorry for ourselves. Our insurance excess is too high for a broken window or a laptop (simple one I have all my arty farty stuff on and watch videos and print stuff from) and there is lots of stuff to clean up including glass everywhere, now that the forensic man has been and gone. Yesterday I played with paste and tissuetex - result above - looks better in the real but given me lots of ideas for working with my favourite abaca tissue. I have also been using paste on silk fibres - interesting surface for stitching on. 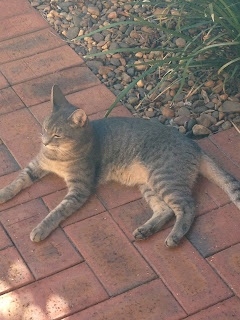 When we were in Broome, this little cat popped in every day and was even found sleeping my my suitcase but no, we did not bring her home. She enjoyed our leftovers though. She is about 1/4 the size of Harley. 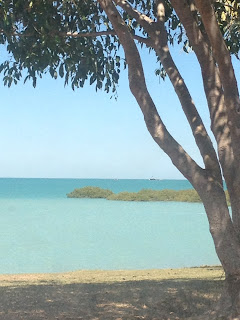 Town Beach in Broome - the colours of the sea are wonderful. 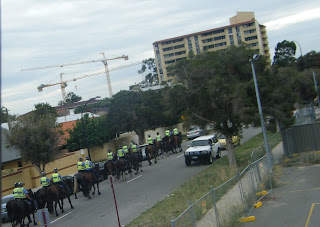 Last week the police horses came down Smith Street - I saw them going down the street and missed a photo but Sara next door caught them going back up. They used to trot up and down a lot a few years back but haven't seen them for ages. Sort gives a wonderful calming feeling to the area.

Because I couldn't do things, I cut up all the prefelts in the back garden. We have some new mouldable felt - the first 7 colours arrived on Friday and the rest are due Tuesday. I am looking forward to playing with it and sharing what I do. Ian has loaded 4 lovely new stencils to the web - Arabian Nights series - sound like me. Three cases of Gelli Plates arrived - one is all gone - I need to try these new stencils on mine. But - tomorrow I have to do all of today's activities, hopefully with a clear head. We did not get injured this week, only got pissed off. A textile artist's STUFF is fortunately not appealing to a burglar looking for lap tops, jewelry, iphone, cash (that was obvious because every little bag with a zip and a thought of contents was out. Thanks though I found my scissors which was in one bag. Let's hope next week is an improvement. We are off for a drive in our hire car because we have one.

Posted by Downunderdale at 3:34 PM

Commiserations. That's one week you'll be glad to see the back of! At least you are both safe - Harley included.
We've been burgled and it all leaves a nasty taste but getting back into the swing of things will soon have you feeling right again.
Perhaps one of those mounted policemen could be persuaded to patrol Smith Street regularly!

wow not a nice week at all.
Hope next week will get better.
have a nice day. Frederika

Wishing you a better week Dale. I'm not sure it could get much worse!

Sorry to hear about your terrible week! I'm so glad your both safe and they didnt try to break into your lovely home. Something good always come from adversity and I look forward to hearing about it soon. Take care x

What a week you've had Dale and I too hope it's better next week, can't be much worse can it.
So it wasn't a greedy Mixed Textiles person that broke in then?

Oh dear, I am sorry to hear of your tribulations. They do seem to come in multiples, don't they?! I hope you, Ian and Harley are feeling chipper again soon.

So very sorry to hear what has happened to you - they say bad things come in threes so you will be ok now - I know that may not help but hopefully will you will start to smile soon.

Dale, I so feel for you and Ian. Wish I lived close by so that I could help with the clean up. Bit far to pop over from Auckland...
Kia kaha.

I so feel for you Dale......we were robbed a few years ago. The shed got robbed first at night and a few weeks later the house in broad daylight. The rotten sods took (amongst other things that were replaceable), my wedding, engagement & eternity rings and my grandmothers wedding & eternity rings & my mothers wedding ring. I had the last three made into one ring as they were all fragile individually. I usually always wore my rings but this day was particularly hot and my hands had swollen, so I left them at home. The lowlifes jemmied open the security door. The police examined the place but no trace was ever found. I wonder if you should consider sensor lights and an alarm system. Get something with a blood curdling noise, hopefully deafen them as well as frighten the daylights out of them.

Having had burglaries before I can totally sympathise with you - what an awful week. It's a horrible feeling knowing someone has been on your property and all the hassle of sorting things out and clearing up.

What a horrid time you're having at the moment, my heart goes out to you, thank goodness you are all okay and not injured. What a bucket load of stress you've had dumped on you - hope things pick up for you soon. x

What a bummer. I felt so sorry when your little green car was beaten up, but having your studio violated is much worse imho. To know that some evil so-and-so has had his/her grubby paws all over your precious stash is enough to send even the sanest of us around the twist.

Sorry I am too far away to help, too.

What a horrible time for you. That is three things so now you should be fine! One feels so violated when an unknown fingers ones stuff. I guess they were looking for money or sell quick things, but recognized play money. Better times coming.