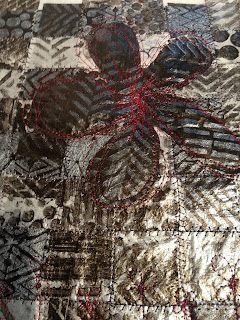 Pottering around with the black and white painted and printed deli paper, wax paper and Tissutex, I decided to cut and weave them and stitch them. Then I cut a flower shape and stitched it with red. It doesn't show that well but simply playing while I think.

We have had a busy weekend - first we had to go and vote, something we object to as we don't believe it should be compulsory and anyway both leaders are totally unbearable. And the cohorts who run with them. How to avoid opening one's ears for the next few years because you can bet that all those false promises will be exactly that. With the rhetoric to match.

Then we enjoyed two games of rugby - the All Blacks (and I am so pleased the weather was not like that in Wellie) and then I doubt if the Wallabies would have been happy with their result - maybe they still haven't got the messiah they thought they were getting after disposing of Robbie. 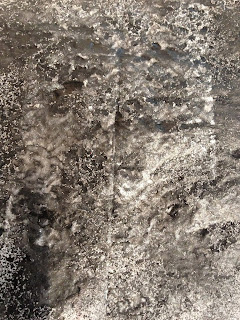 Still playing the deli paper - I did a rubbing with a Shiva stik and then sprayed over the top with Sun Dye Fabric paint - this is acrylic and I was interested to see how it worked or didn't work. Good texture though. 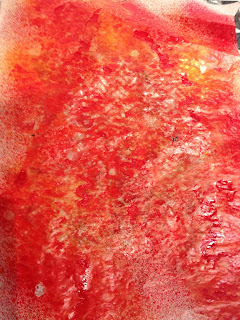 So I tried another and sprayed with different colours. This is the local wax paper and when I hit it with the heat gun it started distorting. Very interesting. Not sure what I will do next though. 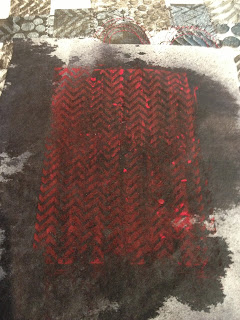 I sprayed a sheet of Tissutex with Flat Fabios (they are the Moonglow without the mica) and when dry, did a rubbing with a red paintstik. 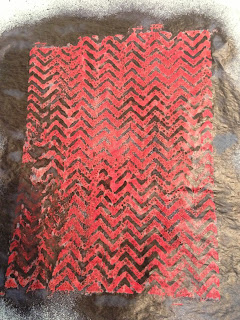 This one I did a rubbing on deli paper and then sprayed - you might be able to see how the spray bubbled rather than soaked in. And the paintstik stands out more. I have done a few others using Paintstiks but you will have to either wait for or subcribe to the e-mag to see them. Ian is working hard on it this weekend so we are getting closer.

Grant is in San Francisco for the 18ft Skiffs - his boat is Fisher and Paykel if you happen to be watching the America's Cup as they are racing their heats straight afterwards starting today. Of course he will be enjoying watching the AC - NZ have had two great wins so far.
Posted by Downunderdale at 3:47 PM

Love what you are working on and the deli paper sample is great. I've just seen your little video of Grant's interview on Facebook - good luck to him and his other crew member - they seem to be enjoying themselves.

Saw a couple of great signs by the side of the road on Sunday--one said--"Stop Press"-Village idiot becomes the new Prime Minister.
The other said--"Neanderthal man moves into the Lodge"
There are some real scally wags around where I live.