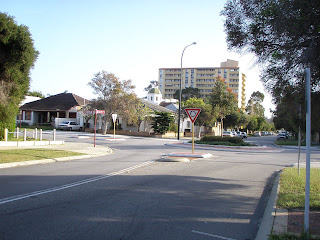 This is our street at 6.30am this morning - nobody much around. Looking up towards the Greek Orthodox Church and the flats which are basically next door to them.

The Serbian Orthodox Church of Saint Sava was built in 1954 by the local Serbian Community. The church stands as a fine example of Postwar Immigrant Nostalgia style architecture. Many of the Serbians who helped in the building of the church had fled from their native Yugoslavia following the end of World War II. The design follows the basic design principles of the Orthodox Church and features stucco walls and two octogonal towers with cupolas topped with crosses. The towers feature arched windows. In 1974 the bell tower was completed and five years later three intricate mosaics were set into the tower's exterior wall. The mosaics were donated by a founder member of the Church, the Ladies Guild and the organisation of Serbian chetniks in WA who dedicated their mosaic in memory of their leader, Draza Mihajlovic. 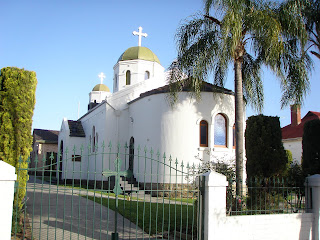 The church always makes me think of the travel pamphlets for the Greek Islands where I have never been. I love the shape and have tried my hand at drawing it quite a few times.

Then I found some lovely flowers settled in a very nondescript garden. 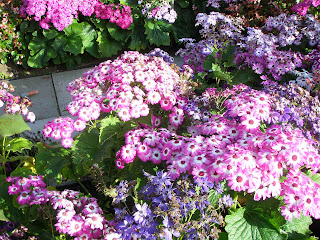 I did something very foolish yesterday - wore a pair of shoes I have hardly worn and now I have a blister - not the right time to get one so I am nurturing it. Grant is back for the weekend so he is busy painting in his house and we are surrounded by chaos - at least once we get on the plane on Tuesday there will nothing else to worry about - well if there is there is nothing we can do about it. I am still packing and packaging and finishing the last of the Holey Moley lessons so I have also been stitching. What will I take with me to stitch and play with?
Posted by Downunderdale at 5:38 PM

You are right about that beautiful church - it does look like the Greek ones. Your street looks very peaceful so early in the day and I would love one of those bungalows. The flowers look very like ones grown as pot plants for indoors only in the UK - I can't remember their name. Hope you have a good flight over and would love to come to Ally Pally to say hello but my feet and legs would never last the day. 'The spirit is willing but the flesh is weak'!

Dale I hope you are travelling business class!! I have just arrived in London this afternoon and have been travelling from Wellington since Saturday late afternoon. It is a LONG way. I always remember (once I am on the plane) why I swore never to do this again. See you at Ally Pally.

I hope that you have a good journey and I will be shopping at your stall next Sunday.Yipheee!!!!