We are so busy it is crazy. If you have ordered and are anxiously waiting your goodies, they are on their way. I don't think we have ever been so busy but it must be punishment for going off to NZ! I have been making my goodie bags (for every order over $50 this month) continuously it would seem. And Ian is slowly adding the specials as well. He has a huge queue of orders which are going down but in the morning I will add to it. We will be working right though to Christmas Day. We had some drama this morning - there are squatters in Grant's house - the one which had the fire and Grant has been waiting for council approval for his building which starts next week - he gets back here on Sunday. I went round to empty the letter box and peeped in one of the windows and there was a very unkempt person asleep. The police apparently are off to collect them tonight and we have been told to keep away!

Back to NZ - the photos haven't even been to the developer but Gilbert van Reenen has very kindly let me 'steal' one of his photos - this one is of Wanaka where my workshops were. It is such fabulous country and if you want to see more wonderful photos go visit Gilbert's website. He is husband of Robyn - half of Christofer Robyn (other half is Chris) who organised the workshop. We have one of his books and he very kindly gave us the other one.

And I bought these fabulous copper buttons from Christofer Robyn for my rust book. They have a nice selection in the shop. I also bought some paper with words - couldn't resist it - and later in Christchurch I found some more....

I have enrolled in the Historical Heirlooms course and while I haven't completed a great deal yet I have been doing a lot of research. So watch this space and I know Janet reads my blog to keep an eye on me I think. I have been drawing and making notes and a little stitching so far. I have also been collecting a few out of print early machine embroidery books which make fine reading I must say. But my special book which has just arrived is The Art of Gormenghast - Kirry Toose told me all about it and Planet Video has just informed me the video is up there for me to borrow. The book is all about the making and the section on the costumes is fascinating. All to be part of my reseach as well. I must hunt for the book to read as well. 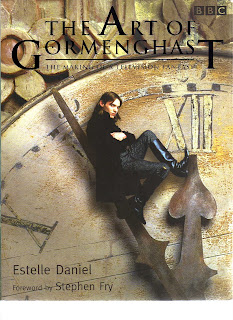 It is very sticky here today - we had a pretend rain which goes with humidity for sure. The lacey hyrangea which tried to die has lovely flowers - I will post a pic tomorrow. I have had a little time to make some instant silk paper as part of my fragment iddeas so I have done something.....
Posted by Downunderdale at 7:22 PM

Sounds like you had a good trip down south. Hot and sticky here too.

Dale - so galed you are on the HH, Janet and I did have a quiet chat aabout it at the weekend. I too have the gormenghast book and have worked several personal pieces with reference to it - the actual BBC production is great and the costumes are fantastic. I was able to see some of them in the flesh when they were on display before being sold!

Can't wait to see what you get up to - posting on your blog re the HH course? I have yet to put up my 'grilled' pieces!